So let’s see, before anything else there are a few things I’ve been meaning to mention here but for one reason and another never got around to.

A new “season” of Classic Scottish Albums started on BBC Radio Scotland this week with the subject of the first Proclaimers album. Reminded me of seeing them open for The Cateran at The Onion Cellar or whatever it was called in Edinburgh. Trying to get people to believe that these two bespectacled chaps were “a Scots Everly Brothers” fell on deaf ears at the time and the rest is history. As always the great David Scott Esq. is the glue that holds these things together and next weeks programme is about Alex Harvey. Tune in via the RS play it again feature, click the listen again link at the top RH and scroll to "Classic Scottish Albums". I’m sure you know the drill by now.

Brijitte West of the New York Loose has a new venture which those of you who are parents might like to check out. Cool Kids Music kicks off with an artist called Mr Ray. Whether or not he took his name from the Suicide song is not known. Incidentally, the NYL album has been delayed due to unforeseen circumstances that are frustrating for all of us. When Cargo have the problems ironed out then we’ll clue you in immediately.

Maia Hirasawa’s debut single on Razzia is out on March 7th entitled “And I Met This Boy”. It’s as sweet a pop nugget as you’re likely to find and serves as a taster for the album “Though, I’m Just Me” on April 4th. Have a listen at her myspace dovecot.

Got a “sneak” mp3 of the title track of Lucky Soul’s “The Great Unwanted” and now I remember who singer Ali Howard reminded me of, Aimee MacDonald. So I googled the Sixties comedy siren’s name and y’know? I couldn’t find more than one mention. And no photos. When you consider the obscure guff you can dig up on almost anything this is peculiar. But anyways, things got even weirder this morning when Janice Forsyth actually mentioned AM on the bloody wireless. Anyway, this is all concurrent to the music. The LS cut is a lush, husky affair of the first order. Somewhat retro-futuristic and (hopefully) headed for the airwaves soon. Meanwhile, why not have a toot around their site.

In a more rock’n’roll vein, today those fine Girl Trouble folks are hosting the following show in Tacoma… 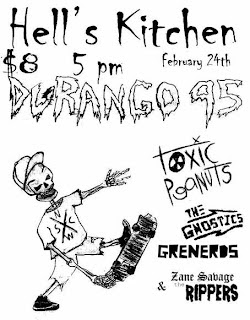 The great Rich Stim has been instrumental in making my father’s album of Pipe tuneage available in itunes. Hopefully I’ve not made an arse of conveying the info and blurb to the cdbaby site to make it all go smoothly. To have had Davie Scott play and produce the thing and then have a member of MX80 whap it onto the internet isn’t something any of us foresaw.
Thanks guys.

And do you think I can find the scribbles with regard to the other stuff I meant to mention? Of course not but it’ll all come out in the, er, wash.
Posted by Lindsay Hutton at 2:55 PM No comments:
Newer Posts Older Posts Home
Subscribe to: Posts (Atom)