Dream Baby Dream... (thanks to Duane for the link)
Posted by Lindsay Hutton at 6:31 PM 2 comments: 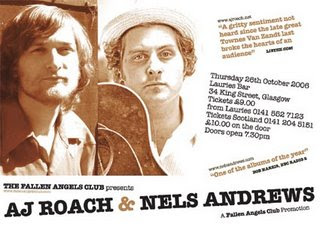 Posted by Lindsay Hutton at 2:21 PM No comments:
It’s Sunday afternoon and I’m wondering, do any of you folks bother with ebay anymore? There’s so much shite on there, isn’t everyone just overwhelmed?? I was thinking about putting stuff on there but sorta cannae really be bothered. (Not so) recent experiences have been less than pleasant due to time wasters and worse. Of course, sending the stuff that I’ve held onto forever to landfill isn’t really an alternative. It would be better to find it a good home but that means sorting it out. Yeeesh. So we’ll see… maybe i’ll have even more time on my hands soon to try and make sense of what will become of it. Them dark clouds that have blighted my horizon in recent times show no real sign of abating. There is the odd shard of light but in general, the day to day bollocks is wearing me down. There will almost certainly never be another print NBT despite efforts to the contrary. The economically challenged state I find myself renders such a pipedream an impossibility. The “found item” nature of the intended concept will most likely be addressed by recycling the materials via some workshop entity. Finding such a beast will be a project in itself.

One positive aspect of this week was the news from Bigor that the great Dusan Hedl of hot beat combo CZD has become the director of Radio Student in Ljubljana. If you haven’t tuned into this fine station then you should. Link in the sidebar. I’m listening to it right bloomin’ now!

The myspace jitters continue, everything I try to do to prevent continual (r)ejection turns into the aforementioned brown stuff. Such is my existence in recent times and there’s little sense of things changing. I’m less able to suffer blowhards and general nonsense than ever. Had I any gumption or balls then I’d get the fuck outta dodge but even that’s not a realistic notion. Leastways, not just yet. Even been thinking about going back to “school” to see if that would give me a handle on this disenfranchised state. That strikes me as somewhat drastic but sometimes needs must and all that. Down most certainly, on the ropes even - but going down kicking, screaming and biting though not necessarily in that order. I HATE the blowhards, and smartarses that are out to further their own aims at the expense of others that are encountered on a (week) daily basis. These idiots are the reason that the entire western world is languishing in the dumper. Is it too late to eradicate them? I’m feeling like it is lately. Also, been considering the production of a most probably blasphemous performance art beastie that sprang into my noggin lately. Sometimes that seems like the most interesting prospect in sticking one’s heid above the parapet. Time to soothe these demons by playing some instrumental moozic at unspeakably high volume methinks. Reportage in due course.
Posted by Lindsay Hutton at 1:44 PM No comments: 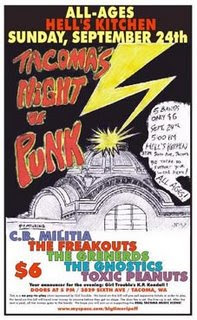 "So you may or may not know that we've decided to host an all-ages punk show in Tacoma at Hell's Kitchen. Starts tomorrow (Sept 24th) at 5 pm and ends promptly at 9. Tell mom and dad you'll be in bed by 10 for school the next day! We are fed up with the rash of pay-to-play shows cropping up in the Northwest. These companies are telling new bands that flyers and print ads don't work. They suggest that the pre-sale of expensive tickets is the only way to have a successful show. Of course, all or most of the money goes to the company not the bands. Girl Trouble says they are full of CRAP. Five new Tacoma bands have agreed to participate in our experiment. We are hosting this show. Girl Trouble is not playing, but KP Kendall will act as Master of Ceremonies. We're doing this one the old fashioned way. No pre-selling tickets, one low price of $6 at the door. When the rent is paid, the rest of the money goes to the bands.
We hope you will join us for what we hope will turn out to be an entertaining evening of rock and roll. For more information be sure to check these fine blogs... Thanks to Three Imaginary Girls for their support on the KEXP website. And always thanks to Tacoma scene supporter Bobble Tiki and the Weekly Volcano."
Posted by Lindsay Hutton at 8:51 AM No comments:
Newer Posts Older Posts Home
Subscribe to: Posts (Atom)