Wow, it’s Thursday, that fact that it’s Christmas Eve sort of concealed that from my recall. It’s been a busy few days – mainly because of my reneging to do anything at the weekend. I’ve arrived at the point that is the real nitty gritty. The (self-imposed) exile. Good to see Mr Tjolsen yesterday in Edinburgh. When I called the bus company, the assistance was such that “it was on the road”. No clue as to how much behind schedule it might be or if it would indeed reach its destination. And some in this country want independence (indie) status. So I walked a little over 3 miles to the train station and then the same distance back. It was pretty neat to wander across the snow in the tranquil and not really cold evening. All that exercise resulted in a pretty sound sleep which is something I’m not entirely accustomed to. Not because I’m a stranger to walking distances but maybe it was the cold fresh air. This morning was more of the same, I think I’ve clocked up around 5 miles today also.

Getting to the supermarket a little late (7.15am) the scumhordes were already out in force. Piling their trolleys high. I’m not sure that they know that the shops are open again on Sunday. And actually some will be open straight through. Makes you long for the days when there was quite literally no retail for 2 or 3 days, in addition to no Sunday trading.

And good old Scotchland. The peedly parliament have passed a bill that means you can’t buy alcohol until 10am in the day now. And Tesco seems to include Sundays in that so it’s a victory for the jakies and another kick in the nuts for those of us who could ideally pick up this commodity earlier if we fancied a wee snifter. Oh, it’s for our own good? Silly me. Well thanks for saving me you sorry bunch of interfering (insert insult of choice here). I was going to plump for fuckers but hey, it’s Christmas.

Nobody is going to be coming here for the next day or so anyway. You’ve all got responsibilities, stuff to do, people to see, that kind of thing. I hope it all works out in an entertaining fashion. It’ll all be on the down low as we hurtle toward the year before the actual new decade begins.
Posted by Lindsay Hutton at 5:34 PM 1 comment: 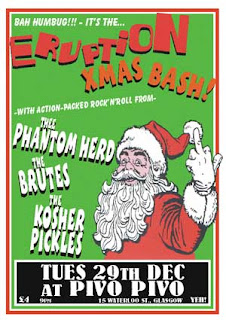 Posted by Lindsay Hutton at 4:44 PM No comments: