Obstacles and the circumnavigation thereof. That seems to be the order of every day in recent living memory. Tractors and roadworks add to the general hindrance. Whatever happened to being able to get from A to fecking B? But anyway, some vinyl, the format of choice in this neighbourhood, to report upon… as the cd hurtles toward oblivion, black (or whatever colour) plastic will always be with us. 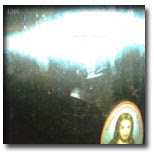 A cheeky wee four track 7” from this Fla, outright punk troupe. Think Black Flag via The Samoans with a little touch of, I’m sure unconscious, BOC rifforama. Lead cut is a thuggish Jello-like version of “The Witch” but their own stuff (“sXe punk”, “Mirrorball”, “Sickness”) is all blessed/cursed with a hefty dose of what is presumably themselves. Not an easy task to breath fresh fetid air into this form buy they do. The EP plays at 33 but you can’t have everything. 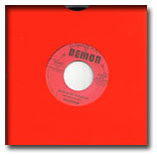 There’s nothing even vaguely ‘billy about this reggaefied soundscape that evokes Morricone via Strummer. A theme for a twisted imaginary western that’s yet to be made. Flip is a dub version that doesn’t add to the original concept whilst remaining true to the form. This 7” is to be given away with a line of clothing called D.I.E and the label is not to be confused with the Brentford label of the same name. 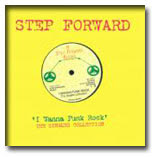 A 10 single vinyl edition of Step Forward singles with an edition of “Sniffin’ Glue” thrown in to validate the contents. This box contains the formative years of The Fall and the pre-Ant activities of Marco Pirroni with The Models, Mark Perry had a hand in collating this slice of history that also includes The Cortinas, Sham 69 and The Lemon Kittens as well as Chelsea, the latter doesn’t age well at all. I remember being introduced to Gene October once and he was a right obnoxious tube. I can think of another word but let’s keep this office friendly shall we. Anyway, this is also available on cd but if you want this stuff then this is the way to hear it, the way it was. 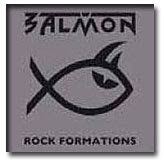 A double, none more black, sumptuous vinyl edition in gatefold, embossed sleeveage, limited to 500 copies. Kim Salmon’s Five Guitar/Two Drummer special forces unit coming out louder and heavier than you care to imagine. Rawk orchestration hewn to be enjoyed at volumes hitherto never explored, man I wish I could get along to the show they’re doing in Melbourne on August 2nd. It’s at the East Brunswick Club there. In terms of carbon footprint, this is obviously a monster. The soundtrack to the last night of the poms even. It must take a heckuva lot of energy to run something this monolithic but I can’t think of a better use for fossil fuels. We might as well go down punching the air with bloody big fixed grins, right? Salmon is the sonic equivalent of Godzilla. Go, go with the flow or get stomped - it's your call. 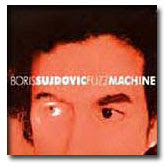 Reviewed the cd of this a few weeks ago and as much as that flies outta the trap, this 45rpm footlong provides an additional dimension of thud. It’s a loud, deep cut that emits a paint stripping sound when turned up to tilt. Like with Salmon, this is a limited, numbered pressing of 500. Available from Soundflat, that’s where mine came from and it got here faster than one of them speeding bullets.
Posted by Lindsay Hutton at 6:46 PM 1 comment: 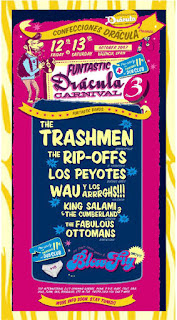 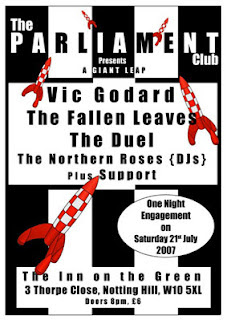