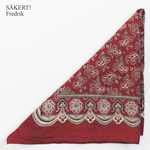 It’s symptomatic of the finest pop clobber that a song can just wash over you. Cleansing the ear palate to stand out as anything but the fodder that we’re constantly bombarded with. “Fredrik” has all the hallmarks of the former. It’s a reactively low key introduction to “Facit” but it bodes well in an understated almost subliminal shimmer. Nobody does it quite like Annika (Norlin) and her crew in Säkert!

Difficult to imagine that any visitor to this ‘hood is unaware of who and what this amounts to but there’s always a possibility that someone isn’t paying attention or might be a newbie. The campaign to spread the word never ceases hereabouts. Visitors to the bunker always go away pledging to buy and wondering just why they haven't heard this phenomenal talent.

It’s still to be established what form the version of the upcoming album with English lyrics will take. My wish is that it finally cements the plain as the neb on your fizzog reality that the world would be a better place if it embraced the works of this young lady who is currently being misrepresented in the Swedish press.
Posted by Lindsay Hutton at 5:22 PM No comments:

Everything seems possible on a Friday morning. It’s a point where some degree of optimism and expectation converge to provide some kind of rush based on the simple premise that it’s the preamble to 2.5 days off. This morning I was thinking to myself that I could judge the time by the light. Having consigned the alarm clock to OFF, I glanced at yon device only to find that maybe my skill wasn’t as honed as I thought. Ergo I lost nearly an hour of that aforementioned end of the week buzz.

Hoo-ever, no point in boo-hooing over that now. I’m home. I plan on spinning The Riverdales at warp volume sometime after I get to the bottom of the ongoing Car Insurance finagle. Ever get the feeling you’re being systematically shaken down? However, I have a (pipe)dream that’s keeping me afloat. I don’t want to say it out loud yet for fear that it’ll come down around my ears.

A lot of music and a couple or three movies is what figures most in the upcoming hours. It would have been cool to have made it to Southern Fried but you can’t always get what you want as that rubber-lipped fella once said.
Posted by Lindsay Hutton at 2:46 PM No comments:
Newer Posts Older Posts Home
Subscribe to: Posts (Atom)