Dutch p-rock legends the Helmettes are workin' on their debut (!) LP, and have some demos up for download on their website. Hardly a match on their classic 45 (but what is?), these new songs still display plenty of the eccentricity that has always surounded these guys...
Posted by Jeroen Vedder at 10:22 PM 1 comment: 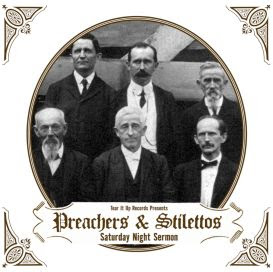 Local rockstars the Stilettos have a new (split) 10" out soon on Tear It Up. The release party will take place right here in Utrecht on Saturday May 13th at the EKKO club.
Posted by Jeroen Vedder at 10:06 PM No comments:
It’s odd the way things turn out. In a previous life I had correspondence with one Steven Patrick Morrissey. I also set up The Cramps fan club with him, although we never met we talked on the phone and he contributed to the print NBT. The last time I think I ever had any contact with him was when I was invited go and see The Smiths at Night Moves in Glasgow. I didn’t care much for “This Charming Man” so I declined.

Our correspondence started because of a mutual fixation with The New York Dolls. Strange then that I should end up 25+ years down the road, seeing the Arthur documentary the day before seeing the phenomenon now known simply as Morrissey at The Albert Halls in Stirling. An attempt to arrange a meet never transpired. The reason for trying to do this was to pass him a copy of Amy Allison’s version of “Everyday Is Like Sunday” because I’d like to think he’d like it. Can’t say I’m a fan of his recorded work or that I’m even familiar with it but I still feel something of a kinship because of that Dolls connection. I’ve had the promo poster of the first album cover on my wall since I got it in 1972 and it’s still going strong. Hearing him and Nina talk about the charge of seeing them on the Whistle Test forever ago, took me right back to the night in question. Clearer than much of what has happened to me in the past few months.

Anyway, the show started of with the bang of “First Of The Gang” and sped somewhat downhill. There was a Led Zep thing going on with the drummer that I wasn’t down with and as tight as the band sounds, they have no tangible soul. Tis a great show if you worship at the altar I’m sure but for the casual onlooker the gilt wore off the gingerbread pretty fast. I was glad to get back to the car and the soothing tones of my Angel Corpus Christi Louie Louie cd. Away from the scene before it spilled out on to the pavey.

Openers Sons and Daughters are much more sinewy live than on record. That rhythm section can really motor. The girl singer is pretty good too. If they were to get some songs together and ditch the guitar player then I think they could be on to something.

And that's yer lot for morning report...
Posted by Lindsay Hutton at 6:30 AM No comments: 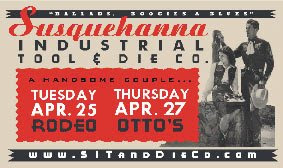