WHAT IF STEWART CRUICKSHANK WAS ONE OF US?


The prospect of trying to shepherd a bill as rammed as this seemed like a heady prospect. It’s usually bad enough with two or three acts but there were a lot of bodies to get on and off stage.

What we maybe didn’t factor in to that concept was that they were doing it for Stewart. And somehow it took on the form of flying by the seat of your breeks. Just like the man himself might have assembled it.

Hadn’t been to the venue before but it’s a great place. Like a bijou St Andrews on the Square perhaps. By the time we got in, David Scott, Jamie Gash, Duglas T Stewart and Chloe Phillips were already on stage. I’m sure there was somebody else too but I was a little distracted by familiar faces in the crowd. The Thanes were next doing a short set of Poets material with original member Fraser Watson on stage with them. I believe they hope to do it all again at some point.


Was it Rab Noakes and Roddy Hart next? I think so. It was all getting to be a bit overwhelming as folks that I hadn’t seen since at least the funeral were appearing all over.

I think Emma Pollock appeared with Rab too, then Kim Edgar and Karine Polwart with Emma. Karine performed a Cruickshank favourite. Joan Osborne’s  “One of Us”. Not the song with the gabba gabba refrain. This was the thing about Stewart, if he liked something he would tirelessly bang on about it. I was subjected to why this was brilliant on many occasions and became convinced that indeed it is.


Did Sandy Semeonoff perform “Grizzly Bear” next? I think he might have. He was incredible, like a one person Daddy Long Legs. Then he introduced The Pastels the way Calvin Johnson did. They did three songs including a version of ‘Different Drum’ that really hit the spot. The overwhelmingness has given way to flat out disorientation at that point. I’m not sure of the running order from here but The Primevals raised the roof and then Iain Shaw followed them with a rendition of “Dinosaur Egg”. Justin Currie and Stuart Nisbet were next up (I think), Stuart sung a song 'wot he wrote' that I could imagine Amy Allison singing. Brian Hogg and Brian Young did a couple of songs and then it was time for Mowgli and the Donuts. John Cavanagh introduced them by suggesting that there had maybe been a pact between Wilf and Stewart that the band wouldn’t play live again until Robert Mugabe had been deposed. Something you couldn’t rule out.

The stories and the flashing images above the stage just added to the happening like nature of the night. The Crunchies closed the proceedings in rapturous style. Versions of “The Letter” and The Velvets “Rock n’ Roll” were transcendental enough but it was The Hooters “I’m Alive” that really hit the message home that he actually is. Not in terms of taking 2 hours to doddle down the Byres Road but there was a distinct presence. 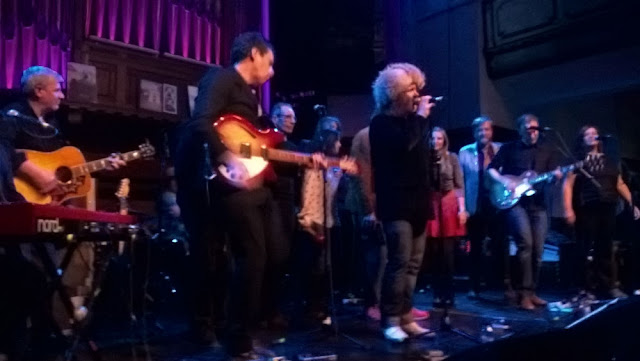 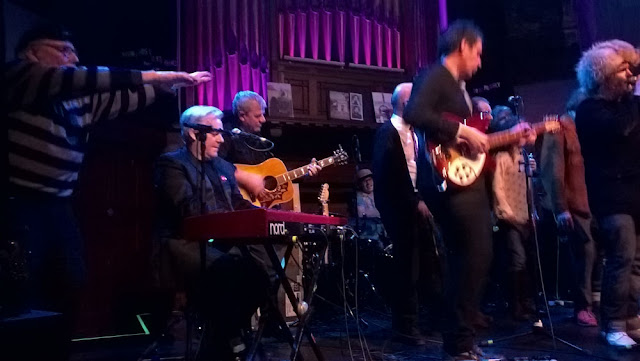 Richard and Helena and Lorraine and Sushil and everybody really managed to put something together that went beyond justice in celebrating the good Captain. The perceived chaos never occurred and there’s no way that the attendees didn’t get the fact that such a thing could likely never be repeated. Of course, that’s not to say we shouldn’t try.

But let’s coast on the outright triumph of this one. Muchas gracias to everyone that took part to create something that I don’t think even Krunch would be inclined to mump about.

A seriously great time was had by all. In case it's of interest, the outcome of the Lou Reed adventure ended up in Stewart becoming a firm friend of the legendary grouch. And Lou picking up the studio tab. All was well that ended well. Just like Friday night.