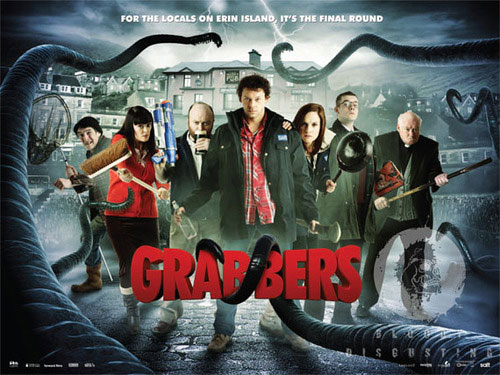 Grabbers never really grabbed me as a title and I deliberately never even watched the trailer until the screening at the Hippodrome’s Monster Day yesterday. The writer Kevin Lehane was there too and did a pre-show discussion/Q+A with Jon Melville. It suggested he has a healthy attitude to his craft and the film itself is one of the most genuinely entertaining and cool things I’ve seen in a while. He mentioned something about the main theme during the chinwag that was very funny and so true but contrary to it perhaps ruining the mood it only heightened it connecting this even more so to "Gremlins". It straddles that fine line of cool and stupid while remaining entirely engaging all the way through without ever appearing to be premeditated.

I don’t want to give anything away because this - to my mind - would appeal to the hardcore demographic of this portal entirely. Like Joe Dante directing "Rockets Galore" from a script by Graham Linehan, right down to the character Paddy who channelled Dick Miller pretty perfectly across the piece. Add a rumour of "Local Hero" and away you go. The film will have an absurdly stunted cinema release on Boxing Day here in the UK. I’m HOPING it’ll return to Bo’ness before it languishes in big telly hell on DVD so I can see it again on the big screen.

The disc will be available on December 31st. Grabbers is the antithesis of bollocks (not the Irish term of endearment) like Sk*fall and the fact that it was made at all suggests there are still surprises out there. And who in their right gourd wouldn’t want to get drunk with Garda Lisa Nolan?

All this and a Ronnie Self tune in the score. To find out which one you’ll have to see it. Or google it but fuck you if you resort to that. This is ultimately what a trip to the pictures is all about and last night we saw it in the ideal setting. Here's to the next Monster Day and all associated with it.
Posted by Lindsay Hutton at 9:54 AM No comments:
Newer Posts Older Posts Home
Subscribe to: Posts (Atom)