The relatively early conclusion to the previous evening meant that a leisurely build into the day could take place. I still never grabbed one of those big custard donutty type things from Casa Mira downstairs. Still, probably for the best. So I managed to locate the second part of the Eros exhibit which was better than the first to my mind. Took a wander through another part of the city on the other side of Gran Via and happened on a couple of small streets where the “cho-cho” trade was in full flow. My original intention was to catch “Whatever Works” at the Capitol Cinema but luckily Mr Birrell tipped me off to the fact that it would have been dubbed there.

So I just wandered around taking in the sights until the YFF squad made it back to the city limits. I caught the movie at Cine Ideal in the early evening. This provided a nice segue to the main event. Not bad but I’m not sure that the mix of Allen and David works on the whole.

Couple of Mahou’s at Chez Munster in the run up to heading out for the Young Fresh Fellows return to Madrid and a rammed El Sol. Unfortunately just getting into the venue as The Hall Monitors were finishing. You can see from this clip that they would have been worth catching. Singer Kathleen Wilson possesses real star quality charisma and a voice that embodies Rachael Nagy and Winehouse with elements of Chrissie Hynde.

And the Young Fresh Fellows, one of the quintessential combos in any language or currency, a tightly loose supernova with a dynamic that swings in and out of new and old songs plus standards like “Sometimes Good Guys Don’t Wear White”. I can’t say I’ve ever seen a better drummer to watch than Tad Hutchison. That cymbal apparatus of his was a trip and I’m told that it’s being held in a secret location until the band returns to Spain sometime in the future. And while we’re on the subject of custom designed, “art of the state” materials, I give you the most sought after piece of iconography since the fragment of the Vambo wall… No – immense is not too strong a word. And piss off Saatchi because you’re not getting it. 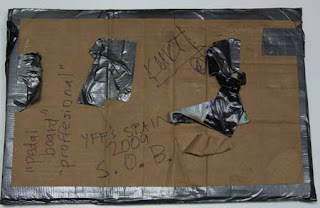 Grand to see Scott again. A guy who keeps himself busy propping up acts that sell gazillions of albums when it should be this troupe that are scoring the swimming pools and big mansions. An honour too to meet Jim Sangster and Kurt Bloch, two individuals responsible for services to rock’n’roll beyond the call forever. If I was Ralph Kramden, I would call them a regular riot.

The clips will give you a taste of the show. Sometimes words aren’t enough. “Would you let your sister? Go with a Rolling Stone??” just doesn’t have the same meter on paper.

Thanks to Joanne Hendricks for the link.

From there to El Tempo Del Gato and surely the shindig that Andrew WK had in mind when he wrote “Party Hard”. If there ever was an off the richter explosion of unabated fun then this was it. Hey, I even banjo’d my glasses, always the sign of a successful night. Special shout out for Juan Perez-Fajardo, the man who kept the smash hits comin’ one after another into the wee hours.

Closed that place and Christophe and I made a pitstop at the very wonderful Wurlitzer to cap off the evening. When we got there, some of the “Gatosquad” were already there and continuing the revelry. You’ve heard the one about the city that never sleeps right, meet the world champeen location! But hey, everything was alright – the clocks were going back so that meant that we called time on this one at 5.30am. My compadre from Belgium was catching a flight at 11am. Hardcore.

Still high on adrenalin but slightly the worse for wear, I dragged myself out of my lair to head for the Rastro Flea Market. Desperately trying to keep out of the sunlight with varying degrees of success. It was a little too overwhelming in terms of crowds and well, junk, but there’s one place down there you need to visit - Satanasa. Callejon del Mellizo 6 is the address.

So I slid back to the Hostal. To grab some rest that might make me feel human again later. To be honest I should have felt much worse but my throat was shredded from the screaming and the smoke. Events were presenting themselves to me in flashback form and there must be photographic evidence I’m sure. It was safe to go out again as the sun was going down so a final wander was in order. Capped the whole thing off with a quiet, low key dinner. This was ideal because I quite literally could not talk by that time. I felt like I’d been gargling glass.

And that was it. The game was a bogey. Next morning I stopped by the Munster offices to bid farewell to the crew and then headed to the airport with Lisa who was flying back to the US a little earlier. Barajas isn’t a great place to burn time but it was better to be there ready. No point in trying to postpone the inevitable. By the time I landed in Edinburgh it was damp and driech. The total opposite of the past few days.

I still haven’t fully recovered and actually the swollen gland on my neck probably needs some assistance. That wasn’t really the kind of keepsake I had in mind when I left.

My thanks to Iñigo, the best host a guy could ever imagine. And to Francisco for making it all possible though the gentle art of persuasion. Ha ha. And also to Ruth, a real sweetheart.

And let’s not forget the multinational rock’n’roll crew that kept the flame burning and will see to it that it always does. Gracias folks. Hope to see each and every one of you down the road apiece.

If you're heading out that way and need a perfectly located place to stay? Check out Hostal Aguilar...

So that's about it troops, for some reason - the right side of my neck has become a tad swollen. I look like one of those talking trees on HR Pufnstuf. Just so long as it lasts over hallowe'en. Talking of which, I hope you all get what you deserve. One way or another.
Posted by Lindsay Hutton at 4:08 PM 1 comment:
Newer Posts Older Posts Home
Subscribe to: Posts (Atom)