Never made it to Edinburgh last night because I began to rake for something that I know is here someplace but that obviously doesn't want to reveal itself. Found a whole bunch of other guff though and am gearing up for a big clear out or at least that’s the idea. Haven’t been in much of a sitting down and writing mood this last wee while. The modem incident knocked me out of whack as has several other things. I’m sick of me and somewhat preoccupied with what might rectify that in relation to a daily epistle being something of a chore.

Some good things coming up though if I can just get over the humf. Eric and Amy next week, Madrid the week after and a little less than 24 hours “dahn the London” in early October. It’s the humdrum in between I can’t be arsed with. Deep down, I know I’m lucky to be able to gallivant at all and that I’m my own worst enemy - give or take.

It’s blowing a gale through the canyons of my napper at the minute.
Posted by Lindsay Hutton at 6:06 PM 1 comment: 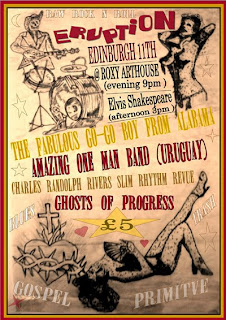 Kicking off in Glasgow on the 10th September, the show hits Edinburgh's Roxy Art House (Roxburgh Street, just behind the Brass Monkey pub) on Saturday the 11th, and Montrose on Sunday 12th.

Featuring the talents of The Fabulous Go-Go Boy from Alabama (who confusingly is actually from Uruguay), The Amazing One Man Band (Brazil), The Ghosts of Progress (Montrose) that describe themselves as a 'One-Man Band + One') and Glasgow's own Charles Randolph Rivers Slim Rhythm Revue (yes, Glasgow), all delivering sets of deconstructed rockabilly and blues in various punkish styles.

Five men. Four bands. Five pounds. If you can't make it to the Roxy, there's a wee taster of the show at Elvis Shakespeare on Leith Walk at 3pm. Why not go to both?!

This is Eruption's first foray into Edinburgh after two years of succesful action on the West coast, and the start of a regular series of gigs by their Auld Reekie branch.
Posted by Lindsay Hutton at 5:47 PM No comments:
Newer Posts Older Posts Home
Subscribe to: Posts (Atom)