This is pretty good. Check it out.
Posted by Lindsay Hutton at 3:46 PM No comments:

I started to try and piece this together last night. Sitting wondering when (hopefully not if) SAS will find my luggage. Mainly because there’s stuff in there like the Sci-Fi Skane cd that I’d hoped to have listened to by now. Just to sustain a certain level of Stockholm-ness before everything fades back into sharp focus with that steel-toecapped boot spraypainted “reality”. It will come as no surprise to regulars of this parish that I have something beyond a fondness for Sweden and its citizens. The fact that I can’t get on to myspace to listen to Nicke Hellacopter’s Death Breath is a further pain in the arse but what can you do. Having had the chance to catch up with the man in person, I know that the connection with his return to death metal will be a napper-rattling pleasure when it does come.

Stockholm at Midsummer is an even bigger gas than usual. The city more or less evacuates. It’s so quiet. But not at Gearfest. Descending upon the fine Debaser club at 3pm for a Nomads “album-release” event, the cities rock and roll fraternity gathered to pay homage to Scandanivia’s finest celebrating their quarter century with Nomadic Dementia. Curated by myself and titled by Dave Champion. The inclusion of “Skolsången” seems to be controversial but if you ever wanted to know what a Eurovision Sex Pistols song might have sounded then this is the cut for you. Also, most fans of the band never heard it so this will sate the completists. Anyway, this comp will hopefully introduce many to the pleasures of this unique combo but more about that later. Plans are underway to make this available in YOUR territory but you can get it direct from Bengans or CD ON now. 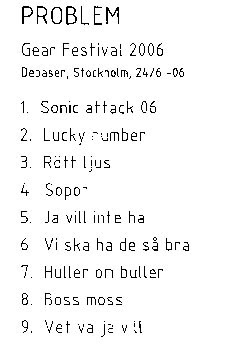 Had a brief stop-off at the recently opened Pet Sounds Bar. Nifty place, just across the street from the shop so there’s something of a Monorail type vibe going on. Actually there are a lot of Glasgow type parallels with the Stockholm music scene in terms of cultural exchange. I find the Scandanavian strain more exotic but then again, I would. However, maybe more about that in a future blether. We’re here to rock, and also to walk many miles of this fabulous place.

Gearfest 2006 was kicked off (no saddo football pun intended) by The Doits. This is pronounced Do Its. They throw great rock shapes and they have their moments but 35 minutes is too long at this juncture. Sometimes less is more and sometimes it’s not enough as we’ll come to learn throughout the duration of this marathon. The Gearclub team pull out all the stops and I doubt you’ll find a better organised event anywhere. A slight runover time accumulates but that’s only to be expected. Problem (from Malmo) are celebrating 30 years and provide a perfectly formed set. In this instance, more would have been justified because the intensity and all-round pop-heartedness was utterly riveting. The Do Its could have donated 15 minutes but ain’t hindsight a wonderful thing. The interests of fairness perhaps have to be considered. Anyway with Problem, the expression of it all turning out beyond alright on the night was never punctuated with such gusto. But anyways… The Last Vegas seem to have a show booked in Dingwall in Scotland this coming week. Attempts to find out exactly why aren’t forthcoming but it seems like an odd shout. The band could do with constraining some of the kinetic energy and replacing it with more of a burn. For all of the aerobic Buckcherry (slightly GNR) action their schtick veers too close to the wrong side of metal. The enthusiasm is not lost an a section of the audience but they’d consumed more alchohol than I had presumably. Eva, Hanna and I provided counselling for one another outside. DM Bob was pretty good and provided some ramshackle blues in the back-room. I think this was prior to TLV but don’t completely recall. Not through any altered state, perish forbid…

However relief is at hand in the shape of Robert Johnson and Punchdrunks. Why this guy isn’t feted across the globe is a gross miscalculation on the part of alleged music fans. Robert is a visionary and an amazing guitar player. His cinematic electronica with shards of surf drags music into the 22nd century and one can only hope that folks will have the gumption to get on board. This was a triumphant performance and he banished the rock demons from next door into abject redundancy. If you haven’t heard this guy then check him out now. Don’t even read the rest of this now just go to his site. We aren’t going anywhere, here’s a passout – I’ll wait here until you come back…

With hardly a pause for breath, The Nomads are on and while it’s no secret that I consider this to be one of the greatest bands that ever was. Their chemistry and ability not to overplay is always refreshing. Their 35 minute set was over way too quickly. First time I saw them play “Ain’t No King of Rock’n’Roll” as well as a well chosen selection of their canon. The set closed with the world debut of their version of “American Beat” with a twist of “nomadic dementia”. Imbibing the Red Star version with a crackle. The mark of a great band is that they always leave you wanting way more.

Catching up with a lot of familiar faces and meeting folks that you’ve known for almost forever but never met is a good tonic for the blues. It was great to finally meet Greg and Barbara from Get Hip and we’ll hopefully get a chance to actually hang out somewhere down the line. The Maggots and The Cynics closed the evening’s program of entertainment with lashings of that garage rock stuff. Providing a sonic buffer for the legions of bottled-up Gearfesters to vent their collective spleen. In the end we’d been at Debaser for 12 hours and walked off into the sunrise to find a taxi.

Five hours later, I was in the airport wondering what the hell had just happened. If indeed it had happened at all but I had a stamp on the back of my right hand so I guess it must have. “Nothing lasts forever”. Certainly nothing that you’d want to. Time to cash that reality check before it expires then. Gearfest is a tremendous event, long may it burn rubber during the Stockholm summer. And don’t forget the Gearclub nights that pepper the calendar, treat yourself to a weekend in a city that really doesn’t sleep and take in the rock thrills.
Posted by Lindsay Hutton at 11:42 AM No comments:
mono presents

'baby jane' are a creepy blend of blues/post-punk/sleaze/rockabilly/baroque 'n' roll.
Check them out at www.myspace.com/babyjanetcb

'beatroot' are the planet's leading purveyors of postindustrialsurfrock !!! 'words are for wimps'
Posted by Lindsay Hutton at 9:10 AM No comments:
So I'm back after my lightning raid on Stockholm for Gearfest. I did harbour the notion that I'd go into work today in order to save a precious vacation day. However, I can't face it.
Also, the airline managed to forget to put my luggage on the bloody plane so hopefully that will turn up at some point. There are materials that I need from there before I can "file my report". Time flew in so fast that I'm not entirely sure at this point that it wasn't just a vivid dream. I'll get back to you on that when I establish wha' 'appen...
Posted by Lindsay Hutton at 5:44 AM No comments:
Newer Posts Older Posts Home
Subscribe to: Posts (Atom)