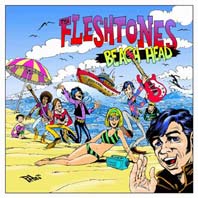 If you want to read about the new Beatles record “All You Need Is Pro-Tools” © Stewart Cruickshank or James chuffin' Bond then navigate away now. Unless of course they've signed up these guys to provide the theme song! Regulars will be conversant already with The Fleshtones “Beach Head”, the latest serving of super-rock. However, this Italian vinyl version is pressed on cool blue vinyl and it has a bonus track “Superrock Baby” which is only available here. So you know what that means…? Yep, you gotta have it. Contact Nicotine Records now and score one.

Update thanks to Ben, Superrock baby is on the Yeproc vinyl also. I'm a tube...
Posted by Lindsay Hutton at 4:54 PM 7 comments:

Due around now... on the Bone Voyage imprint!

For us THE MICRAGIRLS (from Kuopio, Finland) are just the best of their kind. This guitar-organ-drums-combo (all three singing) have gained themselves a live reputation over their native country, but also in the Baltics, Russia and on a previous short tour through Germany, Belgium and Switzerland. Dressed in their exclusive, handmade Micra-outfits and white circus boots -they perform their music with an remarkably honest enthusiasm. It has never been hard for the band to win over a crowd. The vocals are squeaky and roaring, the organ is pure dementia and the guitar rips alongside the primal rhythms.

The Micragirls are what trash-garage-punk-rockarolla is all about. Mean, nasty, filthy, inept and wild - but still with a certain sophistication and coolness! They're armed with great tough songs, full of bizarre tales of meaningless mayhem. Raw primitive pounding and ripping screaming vocals with crazy unintelligible lyrics that make grown men yell for more.

(Thanks to Quintus for the info)

Update on London from Matthew... 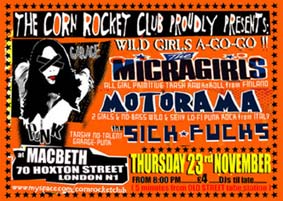