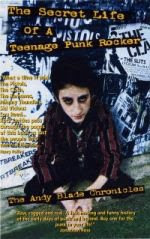 The amount of books available on the late 70s UK punkrock scene is truly staggering, entire rainforrests mashed to pulp so agein' faces can (re-)claim their position in the punk wars. Having read most of these, I was kinda reluctant to dig into yet another one. But lo and behold, Andy Blade's books is an absolute laugh-out-loud read. His band Eater was there from the git-go, so he was able to observe a lot of "historic" events from up close. The main difference bein' that he did so with the view of a 16 year old. And it's just that, that make this book such a refreshing read. Funny, honest (I guess) and not afraid to offend. Just the stories of his run-ins with Rotten's girlfriend/wife Nora are worth the price of admission, but there's plenty more on offer. So, maybe it is time for a Johnny Moped biography....
Posted by Jeroen Vedder at 11:36 PM No comments:

I got excited for about 30 seconds when I saw the words PSYCHOTRONIC CINEMA in the new Edinburgh Filmhouse brochure. However, it doesn't seem to be sanctioned by Michael Weldon despite the use of his lettering in the logo so far as I can tell. Anyway check the cinema website for details on what will run as the short PC season. This still is from The Mack which will kick things off on Thursday 10th November.
Posted by Lindsay Hutton at 1:27 PM No comments: If you find yoursel' in Tokyo tomorrow night...

Click on the poster to see a larger image.
Posted by Lindsay Hutton at 1:04 PM No comments:
The Beat Poets are supposed to be playing The Ashton Lane Beer Festival tomorrow (Sunday 30th) at 7pm. I guess that'll depend on the weather but maybe it'll take place at Brel instead if it's pissing doon.

Coming up next Sunday (November 6th)...

will be doing a free show (well, there'll be a PA donation) at MONO in Glasgow.

This will mark the release of their ON THE RED EYE collection that has just been unleashed by Last Call. A limited quantity of these items will be available on the night but you can order it directly from the label shop ahead of a full Euro release in Spring 2006. Festivities get underway at 9pm so get on down there and claim your (damn) spot. 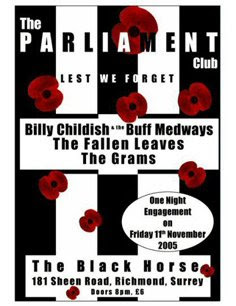 Let's see what else... just read the Billy Childish interview in The Stool Pigeon and I like the cut of his print jib but don't get the fervour with which his music is enjoyed. However, if YOU do then tank on over to this Richmond appearance.

These are the mighty Messer Chups whose Crazy Price cd is available in the UK now via Southern. They're doing 3 shows which i doubt I'll be able to attend but maybe you can? Imagine The Raveonettes if they actually raved with a surfatronic, rockabilly-fixated side salad with extra twang. Well the Chups tower over any of that.

That word verification thing seems to have worked... he typed optimistically...
Posted by Lindsay Hutton at 7:27 AM No comments:
Newer Posts Older Posts Home
Subscribe to: Posts (Atom)