Posted by Lindsay Hutton at 6:51 AM No comments: 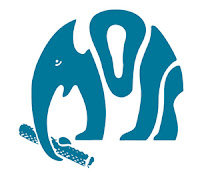 Still shell-shocked after an all too short roll in the Moss Rock City thunder. Got back V late last night and the fog outside replicated that which is in my heid today. Two Dahlmanns sets over the course of Saturday in the shadow of the old paper mill that was an employment staple forever until the interweb made their product obsolete. However, don’t get me stated about that. Look at the company logo. Isn’t that great?
So the kids were suitably enjoyed by the attendees. The festival itself wasn’t exactly run with military precision but it got there. Missed Black Debbath but heard their almighty racket from town as we wandered toward the site. This was the first time I heard the D’s do “I Know You Want Me Back Again”, a song that will be a 45 sometime sooner rather than later I hope. Written by the hit factory that made “Solna” the solid treat that it is.
Quite a late finish on Sunday morning because some smartarse (me) took a wrong turn on the road back to base. I’m glad I did though because wandering in the maze on a clear night was quite a peaceful exercise. It must be great to stay in that location tucked up on the hill yonder.
A low gear day and we had a Svele party at Casa Andreassen. A Svele is a big pancake, double the thickness of a crumpet and about the same circumference. Tasty gear. A wee wander afterwards to say au revoir to my dance partner and a quick pit stop at the beach completed the trip that is hopefully my last to Torp. Much as I love the ferry journey, it’s a pain in  the arse for Andre to schlep me there and back.
There is good news. Ryan-err are starting to fly from Edinburgh to the much closer Rygge on November 6th. That will make such trips considerably easier from both sides. Not that the citizens there need fear constant bombardment by me, I hope some of them will come out this way to the daftest wee country in the world before things go completely skew wiff.
The fog outside is gone. Things are getting autumnal but the gridlock in my napper continues abated. The next jaunt is to The Pipeline for The Nomads/Dahlmanns London bash with The Hip Priests and The Outbursts. Approximately a month away. And once again, Madrid not long after. I'm kind of seizing the moment here...
Posted by Lindsay Hutton at 7:06 PM No comments:

When I saw Rich Nesin’s note about Allen Lanier this morning I had to do a double take. Been keeping the RIP’s in check lately but this one resonates. Blue Öyster Cult made a big impression on a 15 year old me and opened the door to pretty much everything. They were punk rock at the time before the term was corporate-ised. Often lumped with the metal albatross, the band was closer to something like the MC5 but the songs were really something else. The concept of “stun guitar” was an exciting prospect and it all made some kind of sense when they claimed “we’re pain, we’re steel, a plot of knives...”. It still does. Listen to any of these early records and they stand up to the test of time far more than anything by The Clash. Actually the best album those guys made were with BÖC’s producers. Go figure.
And of course those same producers were responsible for something by the name of The Dictators Go Girl Crazy. Indeed HDM mentioned today that Lanier played some keyboards on there, presumably he was Alan Glover? Don’t think I was ever aware of that.
Posted by Lindsay Hutton at 6:33 PM No comments:

RIP - Allen Lanier
Posted by Lindsay Hutton at 6:40 AM No comments:

Just lately it hasn’t been too easy to get away from myself. After a bit of gallivanting I crashed back to earth and find myself wondering WTF is going on. Attempts at getting out of the house on weekends have met with mixed results. Even to the cinema. Although that had a positive blip last night because I dragged my hiney out to see Beyond Midnight. I’ve always liked Julie Delpy and even bumped into her once in Edinburgh with her parents when “Two Days in Paris” was at the EIFF. The follow up to that wasn’t good but I don’t really blame that on her. It seemed mean spirited and that’s something I don’t think she is. She was back up to her usual standard here.
Anyway, it’s good and a worthy catch up in the cycle of this Linklater trilogy. Could there be another instalment? Who knows the way things go in these franchised times but if I’m still around then I’ll give it a whirl. Probably.
One of these days I might even get around to writing about music again. I’ve become a fan of silence. And even quiet. This often manifests as boredom however and has a habit of keelhauling any semblance of sleep. Pass out sometime around 8, wake in a stupor around 11 and then only feel like sleeping when it’s time to get up. Maybe I’m stuck on Madrid time but unfortunately the distractions which exist there aren’t available here.
The Del Lords shows in Newcastle (October 26th) and London (November 11th) have been announced so those look like the bookends to the euro-trip. There’s a festival in Spain on November 2nd where they’ll share a bill with The Dictators NYC. It’s a bit of a pickle...
The latter part of the ’13 looks like being hectic. The Nomads/Dahlmanns/Hip Priests and another combo in London on October 5th is something of an opening salvo. Ms Laura Cantrell is in Glasgow the night before we head down there. All show details here. It’s good to have her back and I’m just waiting on the nod as to when the “No Way There From Here” album will be released. I’m guessing maybe the Monday before that but I’ll confirm that in due course. “Can’t Wait”? Me neither.
There's something fucked with the font size on this blogger thing. Maybe it'll sort itself out, maybe it won't. I can't figure out how to correct it and it's stupid crap like this that makes me want to walk away from ever being on a computer ever again. Also, depending on the browser you're viewing it on, maybe through a bloody phone or a "tablet" then it could look even worse. If you do then don't fret - there are bigger fish to fry. Truly.
Posted by Lindsay Hutton at 12:49 PM No comments:
Newer Posts Older Posts Home
Subscribe to: Posts (Atom)