Posted by Lindsay Hutton at 5:35 AM No comments: 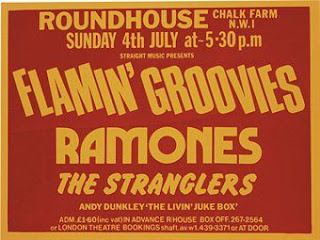 There’s been so much going on that I almost forgot that it’s 36 years today since we hit “the London” for one of those life-changing experiences. Then I saw Al Milman’s posting of Phyllis Stein’s photo of the Roundhouse poster and I was catapulted back in time. Maybe I would have had a career in banking if I hadn’t attended that show? Maybe I’d be refusing my bonus because I’d shaken down the world?? Well, we’ll never know but one thing I do know is that on that Independence Day 1976, my hayfever was playing up bigstyle but when those Ramones came on, they provided a mighty rush of sonic antihistamine. It was a hell of an evening.


The Ramones made everything possible. Perhaps even The Dictators getting over here to open for the reprehensible bottom of the billers a little over a year later. The Cramps were gestating at that point. Poised to become the force that had at least an equal seismic effect on, well, everything. Ditto Suicide.

And that brings us to the modern day and the ginger from Harry Potter playing Cheetah Chrome in a movie about some broken down old drinking haunt on the Bowery. Life taking the piss out of art to some degree, just as well we didn’t see any of it coming.

And Andy Dunkley, what a geezer!
Posted by Lindsay Hutton at 5:15 AM No comments:
Newer Posts Older Posts Home
Subscribe to: Posts (Atom)