... maybe someone you know could use you fixing Santa up with one of these?
Posted by Lindsay Hutton at 7:36 PM No comments: 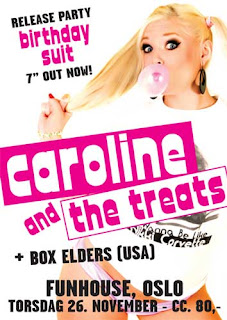 My opinion with regard to the “Top Ten Albums of the Decade” is pretty much that of Brother J.

However, in addition to that and the fact that any list that includes the two sets of jokers at the top of the NME one then I’m sorry but please. Fuck off now. When I first read it, I thought great - a list of Scott Kempner records. If only.

And furthermore, what’s with this 2000 – 2009 pish anyway? 10 to my mind goes 1 to 10, not 0 to 9. Don’t argue. End of. So will I be listing my albums of the decade? No. Provided I’m spared ‘til then, there’ll be the usual end of the annum resumé (in alphabetical not numerical order) at the turn of the year but that’s it. A blanket resolution for next year should be fewer lists. Particularly those that appear everywhere as some kind of marketing ploy for what passes as an “industry” to squeeze some more money out of gullible would-be rats to their karaoke pied piper. It's time their tune was cut short.

On an upbeat note, the very excellent Caroline Andersen has a launch party in Oslo for her debut hot pink 7" entitled "Birthday Suit" on Thursday 26th. Released on L'Edonista via the fine Italian Rockin' Bones imprint - you need to score one of these puppies. All the details at this young lady's outpost on the web.