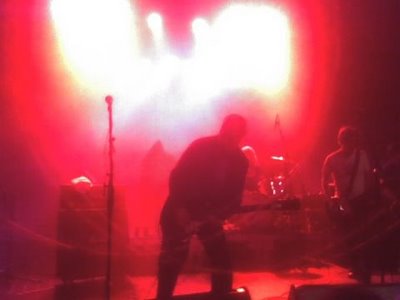 It's stating the obvious that we here at NBT like the Nomads... A lot!... Just check the recent Nomadic Dementia comp and try 'n tell me there's another band out there that's been doin' it, and doin' it right, for the past 25 years. God knows how Lindsay managed to cut things down to a single CD...
Anyways, two years since I last saw 'em (in Paris), last night's show proved that (thankfully) little has changed and the Nomads can still knock 'em dead today just like they did whenever it was when I first saw 'em in Rotterdam (1984, I just checked)
It took a couple of songs before they were able to shift into third gear, but as soon as these guys are firein' on all cylinders there's no stopping 'em...
These days a "hit" is something to boost the statistics of your webcounter, the Nomads are purveyors of the long lost tradition of writing hit songs, and delivering 'em in an appropriate manner (even with Hans and Bjorne bein' somewhat worse for wear after a wild night in Stockholm)
As always, the crowd of 1200+, including the largest number of Turbojugend I've ever seen, needed some oldies to really get into things, but a brief shift into psychobilly-mode for Real Gone Lover is all they need to win 'em over. Game, set, match.... No competition....
Word from Bjorne is that he and Chips have about 16 new songs ready for a new album, and if Ain't No King Of Rock 'n Roll Tonight is any indication of what to expect, we're in for another good un'...
Long may they reign...
Posted by Jeroen Vedder at 11:42 PM 3 comments:
Newer Posts Older Posts Home
Subscribe to: Posts (Atom)