Mr Arnoff just reminded me that there's an Alex Harvey doc, The Last of the Teenage Idols on BBC Radio 2 tonight at 8pm (GMT). Presumably it'll be on the listen again feature also for at least a week. Also, on the R2 front, Brian Matthews returns to Sounds of the Sixties at 8am (GMT) NEXT Saturday (10th) after a lengthy illness.
Posted by Lindsay Hutton at 4:22 PM No comments:
I received this forwarded message from my friend KP yesterday and while I wouldn't normally post something like this here, it's something I feel fairly strongly about so don't mump, got it?...

"I was just wondering if anyone watches what is posted on myspace videos? Shouldn't people be prosecuted for abusing animals if they're making videos of killing and torturing them and posting them on there? This petition requires Myspace to turn over abusive videos and their perpetrators to the proper authorities!"
Click to sign the petition to stop cruelty on myspace.
Personally, i'd cheerfully watch clips of the abusers being tortured but that's just the kind of person I am. Could be a treatment for a new TV phenomenon? You never know...
Posted by Lindsay Hutton at 3:49 PM No comments:
Time for a state of the (indoctri)nation address, such as it is. In a bid to keep this interesting for all of us. To turn up stuff that you want to hear, see and well - hear and see. The emphasis is on directing you to the source. This may sound like repetition but as time grinds on - it bears to be said now and again. Been looking at the stats and we get a little over 7000 hits per month. Not too shabby for something that divnae actively canvas for business or ads or any of that other shite this interweb floods we with. Periodic considerations of doing another print issue have pretty much been crushed completely. I'm constantly reminded to never say never but never is the most likely timeframe. Apart from when I’m totally delusional. Did a wee experiment on myspace to find out if I'd get bombarded with info to pass on and never got more than maybe a half-dozen responses. Maybe this "tool" isn't as sharp as it’s alleged on the packaging.
Away from the pulsebeat of music etc, (hey Art!) the town centre here is up for redevelopment. Or what passes for a town centre. In reality, any soul the place had is long since gone in any sense of retailing or anything else. People go to the stripmalls now. It saves putting the heating on. They trudge around those hanger-size, will to live draining places for hours ala dawn of the dead. Actually Romero’s crew were far more savvy. Last Saturday morning, I took my completed “regeneration” comment form to the local library and deposited it in the box that lies in front of the crap display board with the supposed layout. I bet that somewhere there's one of those terrible "Money For Nothing" type fly-through presentations too. Anyway, let's leave that consideration in the meantime. Came out, looked across the road and noticed that the bingo hall had an agent sign outside. I duly contacted said agent and as of today, no info has been forthcoming.
Turns out that, because of the smoking ban, the place has closed. Long before it became a place to yell "house!", it was the local cinema. The place we went on a Saturday morning and/or afternoon. Ultimately it was the place we managed to sneak underage into our first X rated picture. I think the first one I saw was called “Helga”, an, er, “documentary”. However, I remember “The Good Guys and The Bad Guys” better. Around 1970-ish when I was really wee. According to the Scottish Cinemas site, it ceased to be a moviehouse in 1971. So, a little digging turned up a local report that offered the useful tripe – “if it was knocked down it would allow greater access to the new Asda”. It looks like it’s attributed to a local councillor, but I have it on authority from that individual that it was not. The mentality that would even think about making such a bottom burp out loud far less in print is essentially what we’re up against. Not that opening it as an arts venue would be in any way sustainable but you’d think they’d want to retain some sense of history? You’d think. I’ve got a bee in my proverbial bunnet about this. It’s just another one of these symptoms. Maybe they should flatten the whole town, tarmac it. Make an even bigger car park for the supermarket wars to be fought out in. Maximum succour for the scumhordes. Some effort will be made to make sure that this building doesn’t come down without some noising up of Historic Scotland and whatever other organisation that is supposed to muzzle those idiots that are inclined to bow down before the almighty buck. If the Bo'ness Hippodrome can be redeveloped then surely at least some stops can be extracted to keep the old Empire Electric going for a few years yet.
So, more music stuff coming up soon. Meanwhile, check out Herbie...
Posted by Lindsay Hutton at 11:28 AM No comments: 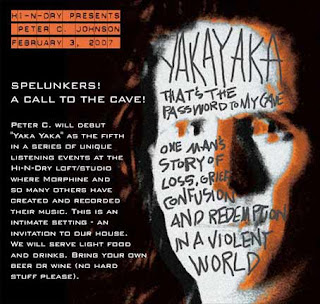 If you're anywhere near the banks of the River Charles this weekend, then this is the hot ticket. A hopelessly oversubscribed moment in history. Wish I was there...
Posted by Lindsay Hutton at 10:42 AM No comments:
TONIGHT! SAT FEB 3 • QUESTION MARK BENEFIT

Join the A-Bones with Muck & the Mires teh Miscreants and the Great Gaylord (direct from Radio City!) and a slew of action packers and special guests at a no holds barred benefit for Q at Brooklyn’s fabulous Magnetic Field. Emcee con fabuloso for the event is LENNY "Nuggets"/"Doc Rock"/"The K" KAYE! Bands will blast, raffles will be held, peanut butter delicacies will be savored, and mayhem will reign supreme while MISS K (no relation to Lenny!, except in good
taste!) spins wild wax with none other than THE EMPRESS a bevy of boss jocks all night long. All proceeds from the door and raffles go direct 100% to Question Mark. As all Q’s mementoes burned, please bring copies of pix and clippings and we’ll send all to Q! Alice Cooper has donated his PANTS and an autographed picture for the raffle! How's about THAT! See you there! Doors at 7 PM!
www.magneticbrooklyn.com

"Veteran rocker Question Mark was devastated after his Michigan home of nearly 40 years was burned to the ground last week, killing five of his pets. Question Mark, who had a number one US hit with "96 Tears" with his band The Mysterians, also lost memorabilia dating back four decades, including a gold record and an organ thought to have once been owned by Pink Floyd."

DJ sets from Lynne K (Carnival Of Lost Soul) and Connie T. Empress (Empire State Soul Club), as well as rock'n'roll raffles throughout the evening (prizes will include original rock posters, photos, t-shirts, vintage memorabilia, and more). Full list of raffle sponsors to come, but so far they include Norton Records, Nights With Alice Cooper, Steve Ritsua, Abkco Records, Little Steven's Underground Garage, Mary Weiss (The Shangri La's), Dead Flowers, Guitar World, Empire State Soul Club, Magnetic Field, Coyote Recording Studios, Bumble & Bumble, Collectibles, and Theresa Kereakes. If you cannot make the shindig and still want to help, you can donate via the Magnetic Field page! All money will be added to what we raise the day of the event via the door, and various items that will be on sale.
Posted by Lindsay Hutton at 6:42 AM 1 comment:
Newer Posts Older Posts Home
Subscribe to: Posts (Atom)