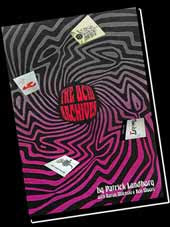 Mr H in Montana sez "Your future is before you unless you are turned around" and he's not wrong. And while you ponder that, consider this recommendation from the man...

"Acid Archives a book offshoot from LYSERGIA by site operator Patrick Lundborg with help from unindicted co-conspirators Aaron Milenski and Ron Moore is already in its second printing. The book covers the American and Canadian rock underground from 1965 - 1982 and if you are a regular reader of NBT, then you're going to want to check it out. The book, ostensibly a collector's buying guide, focuses on giving rarity and value ratings to over 4,000 (many hopelessly obscure) vinyl LPs from the aforementioned time and place, but functions as so much more. Plus, many of the vinyl rarities are easily obtainable in CD format. New light is shed on some familiar names--Music Machine, Chocolate Watchband, David Crosby (!)--by the authors who write from an enthusiast's rather than a collector's perspective, but the bulk of the book is given to things like this about Boyd McCoy of Rochester, NY and his band's live '72 rouser: ". . .a live example of prime drink-spilling lounge music made up of mostly hard rock and soulful funk cover songs. Instead of the usual homogenized, family friendly lounge act, Boyd and the boys are a trashy, grungy and out-of-control intoxicated whirlwind.!" I don't know about you, but my interest is piqued. AA can be divided roughly into five broad categories psych, prog, garage, folk and outer limits. Many of the records covered began as self-produced basement jobs (Stone Harbour, 1971 Ohio "Extraordinary . . . basement psych with songs fading in and out of the speakers, cavemen drums, primitive electronics and murky fuzz lurking in the background") or intriguingly unclassifiable--and often tortured--swipes at "art"(Robbie the Werewolf 1964 L.A. "Remarkable early private press that manages to be a folk LP and a parody of a folk LP at the same time. Half of it is monster-fan-piss-takes on standards such as . . ."Tip Toe Through the Tulips" the other half is Robbie originals hitting an unforgettable apex with the echo-laden Count Dracula track, "...watch out for those vampires some of them are QUEER.") Foreword by Mr. Mike Stax who gives the word, " ...englightened music listeners can separate the hip from the hyped, and begin to navigate their way more readily through the strange and fascinating world of Underground sounds." Oh, and lots of cool pix too. Check with SUBLIMINAL SOUNDS if you want to score a copy."
Posted by Lindsay Hutton at 4:58 PM No comments:
Newer Posts Older Posts Home
Subscribe to: Posts (Atom)

PDFs of all print issues can be accessed below. The 3 page pilot, “0” from September 1976 (Eddie and the Hot Rods drawing on the cover) never survived (at least I don't have one). There were only 10 as I recall.
Rockin’ Bones is here too. 1 - 7 are the newsletter/zines from before the club was closed down. I tried to keep things going and opened it up to the emerging garage/rock n' roll explosion. No. 8 included The Nomads and Scientists. I didn't care to encourage the goth/psychobilly circus and this fizzled out after 12 issues. The LOTC was always about the fans, it's short lifespan (1980 - 1983) generated a lifetime of good faith.
Source material quality wasn't always good and not having access to an A3 scanner anymore didn't help the outcome. Much of the content is embarrassing (to me) but 'tis all part of the journey so you be the judge, jury and/or executioner.
Just before things went awry in the '20, I started a tip sheet.
Numero 1
Numero 2
Numero 3
Numero 4
Numero 5
KNBT is an occasional attempt at rounding up a bunch of songs that might accompany whatever you're up to.
KNBT Episode 1
KNBT Episode 2
KNBT Episode 3
KNBT Episode 4
KNBT Episode 5
KNBT Episode 6
KNBT Episode 7
Muchas gracias to Simon Birrell for his assistance and patience with getting all this on here.
e-mail: lhnbt(at)hotmail(dot)com