Posted by Lindsay Hutton at 8:40 PM No comments: 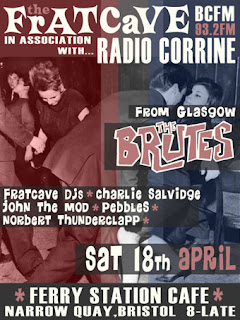 Ahoy there Frat-friends!
There's 60s Shenanigans all weekend (17th - 19th April) down on the Good Ship Corrine/Ferry Station Cafe (opposite Watershed) in Bristol. On Saturday - there's The Deltics, Magic Tractor and musical fun galore up on deck during the day. The evening moves indoors where you can enjoy 60s Garage band The BRUTES, all the way from Glasgow for one show.
Plus a fine selection of Bristol DJs spinning 60s Soul, Psych, R&B, Rock'n'Roll, Go-Go and more!........... 8pm till late.
Oh and it will all be broadcast live on Radio Corrine!!
Hope you can make it along for this cosy nautical shindig!
Posted by Lindsay Hutton at 7:39 PM No comments: 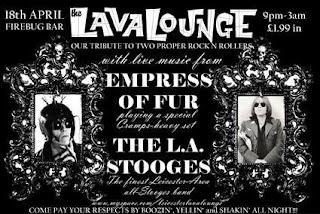 EMPRESS OF FUR and The LA STOOGES at the Lava Lounge on 18th April! A night of drinkin' yellin' and shakin' in tribute to Lux Interior and Ron Asheton...

THE L.A. STOOGES - The best Leicester area all Stooges band!

Pay your respects between 9pm-3am.

This is amazing. Thanks to Sébastien Favre and of course to Spike for posting it in the first place!

Wednesday night at The Cathouse in Glasgow, believe me - it’s not a lot like its LA namesake.

But needs must and MC Lars is in town and, despite having at least 10 years on the character he raps about in “Signing Emo”, that’s where the scene required to be made. When I got there the first band was on. Apparently called Track 9 they looked about my nephew Jamie’s age. They weren’t bad and if they muzzle their bass player and nail him down they might even go on to better things. The synth sound definitely set them apart from their ilk and I’m definitely not in their target demographic.

Next were Failsafe which is a terrible name on the face of it. However there’s a notion of prog to their sound that makes it almost acceptable. If the energy they expend could be harnessed then a small power station could easily be run from that. If Rage Agin Thon Machine had Bruce Dickinson on vocals, they might sound like this. This is the sound of the generation gap. The kids seemed to like it and I wanted to scream “Turn It Down”. In fact I was – in my head. Eventually they relented and they stopped…

…for a break, because they were Lars backing band… Which worked better for me it has to be said. Does this hip hop thing work live then? Yes it does. Even in the face of some technical problems. Lars came on dressed in an Aquabats costume and tore through a set of what should be big hit singles. If there were still such a thing. I have to deduct points for the non-appearance of “Hipster Girl” but by the time he got to “This Gigantic Robot Kills”, the show was in the bag.

I’m not sure if its just a little too savvy to go global but the audience here tonight were verging on ballistic. A small moshpit erupted next to the auld bloke during “Hot Topic (is Not Punk Rock)”. If we had that store here then maybe it would make more sense to the potential listener. We do have similar things here, the biggest being Camden market in “the London” of course.

And last but least longest, The Aquabats bounded on and for 25 minutes they could have been the best band on earth. Their Ed Wood meets Hanna Barbera schtick coupled with the Dickies via Devo with hints of ska was incredibly good natured and well, just plain fun. Why then did they need to burst that bubble with some toe curling “comedy”?