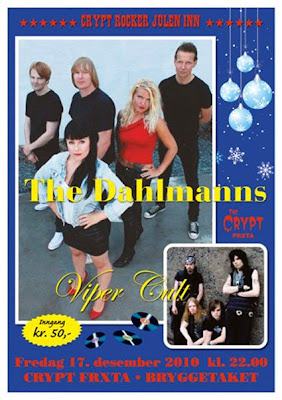 ... and while we're at it, the new EP is JUST back from the pressing plant. GRAB IT!
Posted by Lindsay Hutton at 6:50 PM No comments:

Bollocks to facebook campaigns for alternative Christmas Hits and all that pish. Support a proper seasonal effort, like Lola Dutronic.

Posted by Lindsay Hutton at 6:17 PM No comments:

Inflation rises unexpectedly! No shit Sherlock. Perhaps “unexpectedly” is pushing the envelope of credibility a touch too muckle. We’re being kneecapped fiscally and it’s set to get worse when 2011 comes creeping in. The bunker is in a state of flux. Disarray plus. Day one of the boiler saga has been fraught.

All the weather crap of the past couple weeks has conspired to leave everything out of whack but at least it’s happening. The aftermath is what concerns me. Much as I’d like to embrace the “everything happens for a reason” premise, the actuality gets my goat but a perspective needs to be sought. Hell a snow plough came around this lowly area this morning but I’m praying that the forecast dollup of show will give us a bodyswerve. At least until January 4th-ish.
Posted by Lindsay Hutton at 4:51 PM No comments:
Newer Posts Older Posts Home
Subscribe to: Posts (Atom)