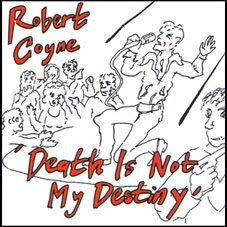 Keep reading about these “artists” that are discovered on the 'net and thrust into the dying embers of the music biz? "Overnight sensations" that burn faux bright and get left like husks at the side of the road. Well, this ain’t one of those. Robert Coyne’s dad was Kevin Coyne. Together with brother Eugene and their bud, Joe Presedo - they formed Silver Chapter when they were but teenagers. SC were way ahead of the loop and one day they’ll be lauded like they ought to have been at the time. I think that Daft Punk name checked them but thus far, the blue touch paper is as yet unlit. The Rev. Jeremy Gluck and Pete (Sonic Boom) Kember are just two of the individuals who can testify as to these youngsters greatness.

Following that, Rob has kept playing and is quite the multi-instrumentalist. He’s made a record at home that it would have taken many thousands of pounds to put together in some fantoosh studio someplace at one time. It’s they type of thing that should be nominated for some of that Mercury Music prize tat if indeed said plaudit was in any way valid. After the Chapter, there was a project called Mean Vincent that was also very cool and this reminds me of that a lot but a lot more broadbased. At the intersection of “Obscured By Clouds” Floyd and Suicide with shards of soul and glam littering the place, “Death…” is a genuinely understated classic. There are moments, like on “Fan Letter” where you get a glimpse of what BÖC might have sounded like if Alex Chilton had been part of the group. And then there’s the instrumental, “Golden Ages” – where Percy Faith goes krautrock. “Shoot-Out at the Zoo” comes on like Hall and Oates if they’d been produced by Bob Ezrin.

Rob Coyne has been true to his school for a long time now. One of life’s true gentlemen that makes music for himself that ought to be heard by everybody. Check his stuff out on his myspace where you can see the other acts that the man has played with over the years. You can enquire about this Turpentine Records release there too. If you’re elsewhere in Europe then click here for the lowdown on how to score a copy.
Posted by Lindsay Hutton at 2:22 PM 1 comment:
Newer Posts Older Posts Home
Subscribe to: Posts (Atom)