Bonnier Amigo has embarked on a series of collections from the vault of MNW. An important portal over the past three decades to a vast mine of every type of music you can think of. Of course, practically all of it is Swedish language so perhaps of limited interest to those who don’t speak the language. However, to those of us who never let a language barrier get in the way of enjoying some primo rock action – there’s a wealth of gear to discover here.

There are prog and postpunk comps that look like they might be worth investigating amongst the 18 2 x cd sets that have already come out. But let’s start here with two that would possibly be of immediate interest to NBT-ites. Stry Terrarie (real name - Anders Sjöholm) was a mainstay of many units across the years. Best known of these outside Sweden was arguably Babylon Blues. He also produced the album, “Enjoy The Creeps”. I never heard the Garbochock tracks before and those sound a little like Roxy Music produced by Joe Meek. I’m looking at the name Mats Gustafsson on the Besökarna cuts and wondering if it’s the same guy that’ll be tearing up a small Edinburgh hostelry later tonight with The Thing?

A general postpunk keyboard driven thread runs throughout from the earlier more frantic material through to the broader based Scandanavian rock model. Rymdimperiet’s quasi-funk leaves me a little cold but that doesn’t hang around for long, that was perhaps a glitsch in transit. Even The Clash approximations of the earlier BB stuff offers promise of what was to come afterwards. It’s cool to hear them grow up. Covering the period from 1978 to 1991, this doesn’t include any Ebba Grön or subsequent collabs with Thåström – there’s much to get your old hearing gear around here. 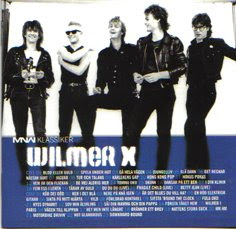 Wilmer X were one of the first Swedish lingo bands I ever heard. They were and remain a far more traditional unit in the style of mid-seventies pub rock groups like The Brinsleys. They combined that with a Groovies type rock’n’roll sensibility that would ultimately flirt on the outer limits of power pop. Like Eddie and the Hot Rods channelling Manfred Mann, Wilmer X has cut a swathe and remained popular over the years by laying down a timeless, bar-rock blueprint that can only really be pulled off by guys who know the script inside out.

At some points they might sound like (the) Status Quo, then maybe Foghat but the Scandanavian ability to crisply deliver the goods never lets it descend into mere parody. On the other hand, “Gå Hella Vägen” is as good as most of The Undertones catalogue. This kicks off in 1980 so I guess it was several years out of kilter. Had it started in 1978 then it could almost have been charted in tandem with what was happening around the world.

Red hot rhythm and blues, blastin’ beer bust beauties that must be some kind of fun to catch in a bar although at the prices they have over there it’s the powerhouse music that’ll have to be doing the intoxicating. And watch out for a very special comp coming soon from this direction, more on that when available...
Posted by Lindsay Hutton at 5:44 PM No comments:

Thanks to PJ for the link... the crazy beat finally caught up with ol' BLR!

and gracias to Gavin Martin for this...

Posted by Lindsay Hutton at 3:13 PM No comments: 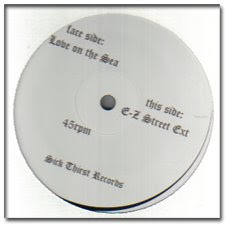 Coincidence with the 40th anniversary of the lunar landing notwithstanding, some important notes from space have been captured and etched into 12” vinyl by Sick Thirst. These infectious “repeat-o-rock” tones may or may not be perpetrated by a duo. The only clear information about Moon Duo is that Ripley of Wooden Shjips is involved and this is a primitive, ever more Velvets-y descent into the maelstrom. The Shjips are positively orchestra material compared to this. Designed to be played at 45rpm, the trick is to set the controls for 33rpm and let it marinade your grey matter.

So what you get is 4 songs for the price of two, at album speed it sounds like satan fronting Blue Cheer attempting to create Suicide type modulations. JD King’s concept of the 45 at 33 is once again proven to be several light years ahead of its time. I suspect this drone-tastic squall to be the martian black angel’s death song being channelled by an earthly San Franciscan host prone to what some could figure as experiments in sonic terror. Wonder what goes on if you plays it backwards?

Anyway, this is available now in places where fine records are sold but move fast, it won’t be around for anything like forever in this magic vinyl format.
Posted by Lindsay Hutton at 1:55 PM No comments:

Let's ease you in this Sunday am (of course it's evening is Australia and Japan, etc but we welcome our viewers from there a'naw)...

and the fantastic Jackie De Shannon... courtesy of Gavin Martin via facebook

Posted by Lindsay Hutton at 7:33 AM No comments:

The Bambi Molesters in Ljubljana, Slovenia on September 19th
(with Heavy Trash)
!
Posted by Lindsay Hutton at 7:17 AM No comments: 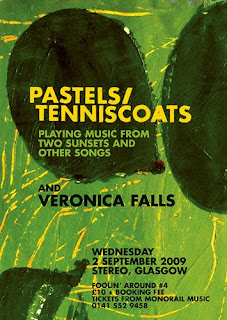