Brother Ben Gart made the pilgrimage to the Motor City at the weekend to witness the ignition of the two-headed monster that is the return of The Gories and The Oblivians to the boards. The blast off en route to "Blast Off" and other shows around Europe. Here's what he had to say...

"I spent about 5 hours driving from Chicago to Detroit Saturday afternoon and it was a beautiful day, no construction or traffic problems either. Couldn't have asked for a better start to the weekend. Once I got past Ann Arbor, I found the hotel in lovely Romulus, across the street from the airport. They were nice and the room was as good as could be expected for an economy joint. After a bit of a lie down, I got up, got a quick bite to eat from the hot redhead next door and headed into the (Motor) City proper.

I was warned that Detroit was a place to be cautious about -- Michigan going on 14% unemployment, one in three homes condemned or boarded up and a high crime level. Quite honestly, while it did seem run down and old, it was very cool. A lot of character there! The neighbourhood that the Majestic Theatre is in isn't bad at all, situated next to a university and plenty of other theatres across from it. I was really excited to see the place since it has such a cool history, playing a big part in the Motown legacy. After parking in the lot out back, I wandered inside and saw Mick Collins deeply focused with texting on his phone (it seemed) and Danny driving his beat-up old station wagon & giving someone a jump. Decided to leave them alone and just get in line. 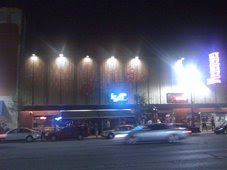 Once inside, I was thrilled to see that the Majestic did have a lot of character -- I looked around at walls and ceiling, imagining what it would've been like to see so many legends perform there. Old soul, R&B and blues blasted out of the speakers setting the atmosphere just right. The Oblivians took the stage at around 9.30pm and things heated up quick, kicking the energy up to high gear. Having never seen them and not being too familiar with their material, I quickly "got" what they're about. A lot of electricity, sweat and screaming like mad preachers high on sin. The crowd ate it up like a handful of speed. They blasted through 19 tunes in just about an hour giving The Gories something to live up to. There were no encores. Greg, Eric and Jack got off fast to make way for the reason most everyone came for.

After about 20 – 30 minutes setting up and tuning, The Gories took the stage and the audience went absolutely fucking nuts! Talk about something I've missed at a lot of shows over recent years -- deep appreciation by fans, loudly vocalized "thankyous" they (rarely) got to hear in the 80s and 90s. Mick made the bittersweet comment "Who are all you people?" The band started up on high gear with "Hey Hey, We're The Gories" and didn't let up. I was blown away at how they appeared not to have changed at all since they last played these songs with any regularity. Hopefully they really didn't practice at all since they decided to play these shows, to ensure that the three of them stayed true to the sound.

Danny took the opportunity to use some of the skills he's learned over the years to play "Detroit Breakdown", honking on his harmonica and playing guitar at the same time. On "Ghostrider", Mick played what was likely the coolest guitar-freakout solo I have ever seen or heard live! They cranked out 20 songs, running through classic after classic like they’ve never been away. Embodying generations of bluesmen and rock'n'rollers spirits, it was gratifying to see a broken-up band take to a stage again and unleash that rare lightning from a bottle most washed up has-beens could never match in the first place.

The only complaint I have is actually a compliment -- I wish they would have kept on playing all night."