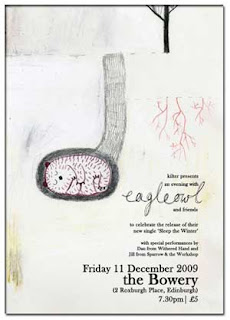 Just last night I was talking about Eagleowl and how they're one of the best bands I've seen in recent times. And then I find out that there's a launch for their new single, "Sleep The Winter" tonight in Edinburgh. An instore at Avalanche in Cockburn Street is also on tomorrow evening at 5.30pm. Go to the bands website for all the details and if you're able to go to either then I heartily recommend that notion. The label is Kilter and there's a great press ref on there that accurately describes them. I'm not gonna reproduce it here, go see for yourself.

Logistically, it's unlikely that I'll make either but this is the best "local" act I've come across in quite some time. Hauntingly groovy in every respect. More about the 45 when I get my mitts on the vinyl. And the reason that I may not make it is because of the event below. "A red hot riot of the rages"? Well that remains to be seen but Bubblegum Winter is an ambitious one off event curated by Gary O' Connor of Bubblegum Records that will take place in STEREO tomorrow night. So I have a logistical quandry in addition to the fact that I'm not entirely down with leaving the house at all this weekend. Either which way, extra kudos for ripping off the "Bop Girl" poster. As far as I know, The Goofers will not be making a surprise appearance. 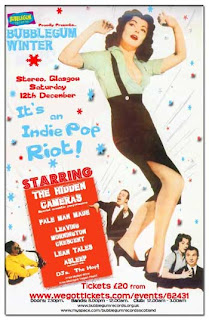 Posted by Lindsay Hutton at 4:07 PM No comments:

It was a right pea souper this morning on the drive to the day prison. Never seen fog like it in ages. John Carpenter would have been impressed. No sign of Adrienne Barbeau though sadly. One small advantage was not having to scrape frost for the third time in 12 hours. Like Sony Bono sez "it's the little things".

How wuz the Dolls? Well way busier than I anticipated that’s for sure. It’s a real benefit to have a good venue for this size of bun fight in Edinburgh. Isa and the Filthy Tongues came on at 8pm sharp. Word on the sidewalk (see what I did there, juxtaposed that with pavie to give it that NY feel…?) is that their album is great. They make a lot of the right noises and I'm all for the concept of recycling be it musical or anything else. You might like them. Someone had apparently told Martin Metcalfe that it would be a good idea to dress up as Andrew Eldridge. Oh, an their singer doesn't appear to be called Isa but these are minor quibbles.

Of all the old timers that are hauling around the planet, The Dolls give a bankable approximation of their prowess. While I didn’t enjoy this as much as the first time I saw the comeback, it was a good show. Johansen looks very healthy in comparison to the initial foray and it sticks in my craw that I didn’t go to the RAH to see then with Arthur. But that’s what I do best, cutting off my nose to spite what isn’t much of a face to begin with.

It’s cool when “Jet Boy” seems to disintegrate into resembling “Highway Star”. I swear I heard the harmonic of that in my napper. So of course the closer is “Personality Crisis” and it seems like it’s been a long journey for what was, at the time, a patented five headed Frankenstein.
Posted by Lindsay Hutton at 2:58 PM No comments: