Saw “Skeletons” this afternoon, after all, I couldn’t miss a biopic of one of my favourite bands, right? And who by any stretch of the imagination could play Lou Whitney? That one is a one off. Anyway, this film has been getting good reviews and I’m surprised that it only runs for 95 minutes. It felt much longer, and I fell asleep into the bargain. That’s not to say that it’s bad but it takes a long time to get where it’s going and the surreal feel of Terry Gilliam directing an episode of “Last of the Summer Wine in The Twilight Zone” sort of disgruntled me.

Found the faux French soundtrack intrusive too. It all seems a bit deliberate but maybe being awake during the bit I missed would have made all the difference. Doubt that I’ll ever know.
Posted by Lindsay Hutton at 6:42 PM No comments: 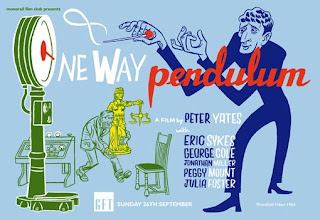 The Monorail Film Club is back at GFT next week for its new semester! One Way Pendulum will screen on Sunday 26 September at 7.30pm.

Arthur Groomkirby (Sykes) needs a hobby and his latest fancy is to rebuild the Old Bailey’s court no.7 in the family living room. His wife Mabel complains of the increase in housework and, in any case, already has her hands full with endless food deliveries cluttering up the house. Thankfully Myra Gantry (Peggy Mount) is on hand to help consume the backlog. The Groomkirby’s huffy teenage daughter Sylvia is ashamed to leave the house because she imagines her arms are too short, and their son Kirby (Jonathan Miller) is fixated on rehearsing a massed choir of speak-your-weight machines, part of a nefarious plan to supply himself with a perpetual pretext to dress in black.

Adapted from N F Simpson’s acclaimed play and featuring a cast of well-loved character actors, "One Way Pendulum" is an odd and engaging absurdist comedy, a lost gem from the production company that released "Saturday Night, Sunday Morning" and "Loneliness of a Long Distance Runner".