I always get a bit antsy on days like today. It just seems like things need to fast forward now. Not that I haven’t liked being off or anything but let’s face it, another set of numbers is unlikely to change anything is it? However much we want it to. But we can help one another through the shit storm. There will be casualties but that’s life. It’s the greed that needs to be brought into check. I have no idea how that could be achieved because it’s those that are alleged to be running the show who are the worst offenders. The populace is so punch drunk (and presumably stupid) that they’d rather vote for some sub-karaoke bilge than an actual government. How do they engage the public to take an interest? They can’t because of their creepiness and greediness and general inability to do anything of value. But anyway, sometimes things do take an unexpected turn. But would or will anybody notice?

The first Lefsetz letter of 2010 – or was it the last one of 2009 (not sure because I turned in before “the bells”) – is full of his same old bullshit. Your reporter almost went off on one when he read it but then realised that the guy only services a scene that celebrates itself. Some of them might throw their toys out of the pram if he begins to get close but thems the breaks. His taste in music is closer to the great unwashed than he seems to perceive. I really should unsubscribe but actually enjoy the incessant whining. The same old mantra. The next revolution will sweep all of that away. It’s fermenting someplace. It has to be.

Meanwhile, there are things dotted on the horizon that will pepper this coming year with some relief. The first major happening being a trip to Stockholm for a very special event on March 5th, full details in due course. And there’s the Glasgow Film Festival in February which includes a Pere Ubu show at The Classic Grand on February 20th. In a film related subject, Ben brought to my attention that a major figure in horror fandom died the week before Christmas...

Kogar is serving up some Forbidden City Dog Food... Yum!
Posted by Lindsay Hutton at 9:30 AM No comments: 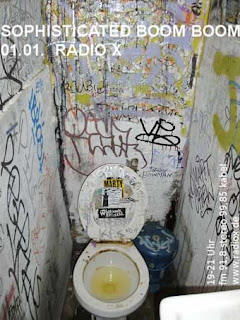 Stefan is taking time out from his non-stop celebrating of a new year to provide some internet radio company for you. This is good news from anti-social types such as myself. Bear in mind that this is between 6 and 8 UK time, I've no idea at this point how that equates to elsewhere further afield. It would be worth your while to find out.
Posted by Lindsay Hutton at 9:12 AM No comments:
Newer Posts Older Posts Home
Subscribe to: Posts (Atom)