Via Ulf Ramone's facebook... for a minute I thought Joe had his NBT shirt on... 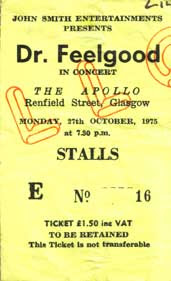 One thing you’ll notice with “Oil City Confidential” is the way that the music is cut into it. It’s twice as loud as the rest of the audio and I’m pretty sure that’s intentional, to punctuate the pounding that the band created. The final part of Julien Temple’s “music trilogy” goes back before the creation of his other two subjects. Both of which make brief appearances in the film to complete the weave.

Anyway, this is the best of the three and perhaps it’s the best music documentary since the finest example you’ll never see “A True Testimonial”. The reason is that the Feelgoods were a proper rock’n’roll band, completely wired and for real, maybe even dangerous.
As characters too, these weren’t just personas. They were the product of the Thames delta and a new word “canveycentric” was coined especially for this documentary.You’ll even see Bob Harris having a fly puff during “Keep It Out Of Sight”. Wilko does a great job of relating the story but the all out star for me is Lee’s mum. She refers to Wilko gently as “a troubled kind of person”. What a lovely woman. 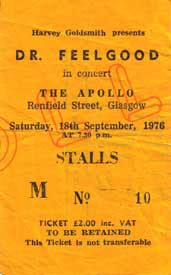 So with the advent of the film opening in February, you need to grab tickets for the GFT screening on February 2nd. There are also screenings that day across the rest of the country. These will be all the more poignant following the recent passing of Mick Green of (Johnny Kidd and) The Pirates.

Hearing the sound fly out of a proper theatre sound system should be big fun but this isn’t just a story about a band. It’s about how something can grow in isolation and eventually sweep the world. Brilleaux’s widow recounts a line that her husband quipped, “I’m not fucking Shakespeare, I don’t write ‘em, I just sing ‘em”.

Don’t you wish the so-called acts of today would take a leaf out of that book. “Oil City Confidential” is an excellent film about a catalytic combo that kicked off a revolution in my lifetime when it really mattered.

By the time The Pistols and The Clash came along, it was about something else. There was love in their hopped up, cut and shut R&B and you’ll feel that when you watch this.
Posted by Lindsay Hutton at 2:22 PM 2 comments:
Newer Posts Older Posts Home
Subscribe to: Posts (Atom)