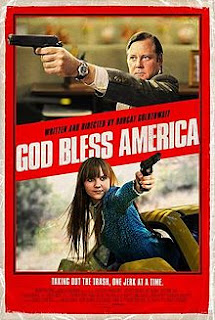 I was very excited about seeing “God Bless America”. Part of me hoped it was a documentary of sorts but it’s OK folks – I only partly suspended disbelief. Joel Murray’s portrayal of Frank is spot on. The facial expressions say more than the often laboured script and I didn’t realise this was Bill Murray’s brother but they do look alike.
For its shortcomings, there is a chunk of heart here. All the things that are slowly wearing us all down are identified and there for the grace of who or whatever, we’re all Frank(ie)s. At one point, I just felt so sorry for the guy and quickly realised that life post- Spinal Tap has just all gotten so spoof like. Who knows what’s real and what’s not anymore? Not me.

Director Bobcat Goldthwaite was at the screening with Joel Murray. They’re an entertaining double act and very funny. I don’t want to give too much away because you should see it. Maybe calibrate your expectations a little lower than mine but this, for the most part, ought to hit some kind of spot. The use of Alice Cooper’s “Hello Hooray” is truly great amidst a very cool soundtrack, one piece I’d swear was by ACC if I didn’t know it wasn’t the lady in question.

With elements of Waters and Bartel here and there it’s an entertaining ride. The “Glenn Beck” character wasn’t made to suffer as much as he deserved to but you can’t win ‘em all. A film festival screening might tend to be preaching to the converted. A better use of the film would be to screen it to the folks it goes after, those that accept the lowest common denominator shit that entertainment would appear to have become.

And try to see it in a theatre if you can. This is something to be experienced with other – preferably not like-minded - cattle.