RJaP in action at Gearclub on Friday. This and more Bgrrrlie footage at YouTube...
Posted by Lindsay Hutton at 7:13 PM No comments:
Well, I had every intention of trying to catch Shock and Awe's matinee performance at The Full Moon Club in Edinburgh today but the lurghi, or it's inability to become full blown, put paid to that. Didn't feel much like dragging my germ-ridden carcass anyplace and am just trying to keep upright at the minute. So let's play some records and try and stop the party fizzling out altogether... 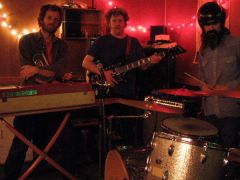 Spirits are raised momentarily by the San Fran-based outfit that practices their dark arts under the moniker of Wooden Shjips. They have one 10” and one 7” available and you need them. Haven’t heard such a fuzzed-out pent up explosion of sound in a long long time. It’s Spacemen 3 via The Scientists transfusion of Mack Rebennack’s “Storm Warning” will have you under it’s spell in no time. This is the now sound that hick practitioners like Primal Scream would dream of if they had even the slightest idea of what soul was. They’re in the studio now readying their debut full length onslaught for Holy Mountain. Bring on them sonic commandments I say. These days Jesus Loves Wooden Shjips, he's had it with The Stooges. These are both available in the UK from Volcanic Tongue. Google availability elsewhere. The bush telegraph has been buzzing for some months now and the fuse is well and truly lit. The band is playing at Cafe Du Nord in SF on January 15th so if anybody would like to go along and file a report then that would be just dandy. Are the four horsemen scheduled to come clip-cloppin' over that hill with "Dance California" as their theme song? Only time will tell.

In the Netherlands yonder, A Fistful of Records have some 7 inch thrills to bestow. The Burning Bush EP sees Don Howland channelling his singe-ed blues in Bobby Dylan’s “As I Went Out One Morning” in typically agitated fashion. Flip contains a version of the Fugs “Coming Down” and a Howland original entitled “Hell’s Angel”. Talking about The Fugs, I always wished somebody would tackle “Crystal Liason”… any takers? Still on FOR, Movie Star Junkies (from Italy) weigh in with a fried Kim Salmon-a-Billy smoker that sounds compressed to the point that you fear they’ll blow a gasket at any minute. The Hipshakes hail from Sheffield and their "Stick Around" EP makes fellow Northerner’s Arctic Flunkeys sound like Westlife (or some such terrible karaoke tripe). A highly strung cacophony - but in a good way. You could light up a city with this kind of electricity. Digger and the Pussycats “Live At The World Cup 2006” is likewise inflicted with a primal wildness that exists outside of the digital world, you never heard “Little Honda” pounded out like this before. This kind of sound can’t be derived from a daft little silver disc. It just can’t. If you have any bother finding FOR releases then e-mail and I’ll connect you.

And with that i'll bid you "a-tish-oo". Not some obscure 5678's b-side... that and the fact that this bugger doesn't seem to want to upload the cover images that i'm trying to post. I'll be back. Sniffles, snotters and coughing fits willing...
Posted by Lindsay Hutton at 3:34 PM 1 comment:
Posted by Lindsay Hutton at 1:08 PM No comments:
Newer Posts Older Posts Home
Subscribe to: Posts (Atom)