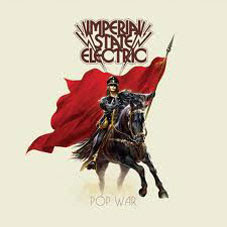 So, let’s take the Foo(d) Fighters as a point of reference for comparison to Imperial State Electric. How nice a guy or how much of a fan he is of music, Dave Grohl and co have no songs. They throw all the right shapes and never fail to come up short. Two albums in to their existence, ISE burst in and kick the FF’s arse at every turn. In terms of outright “rock”, I’m not sure that there’s a better recent example than “Pop War”.

It’s so soulfully and beautifully constructed from shards of the past yet it’s no museum piece. Proof that, when done with this much love for the form, that it can be timeless. While audiences are queuing to hear albums being played live in order, the bastards are quite happy to shuffle play their lives away. Or make do with approximations. It’s no secret that I believe (and still do) that The Hellacopters should have ruled the earth. Nicke Andersson is a master craftsman. Tinkering away caring not a jot if the world catches up with him or not. His fellow passengers in the ‘copters are all doing other things too but if Dregen has stayed put and not joined Backyard Babies then the landscape of this story might be different.

Consisting of just 10 songs, this is over before you know it. Never outstaying any welcome and even countering ADD, it just rattles through offering quality over quantity, leaving the listener wanting more. It’s quite a tonic to these times in addition to being such a joyous noise. I wonder if there’s a tear in the timeslip that could connect these guys with the size of audience that they deserve. I’m afraid it might actually be too pure for mass consumption. But that would be any potential consumer’s loss. We don’t have time to concern ourselves with that.

Anybody with the chops to sound like they thought it would be a good idea to resuscitate memories of Montrose one minute and have the cheek to emulate Roy Wood-era ELO the next is entirely the type of person who should be in high rock office. “Enough To Break Your Heart” does just that and well, it is. And as the strings soar into the stratosphere, I can’t help but think that we should move lock stock and barrel to ISEland. For it seems like a far, far better place. 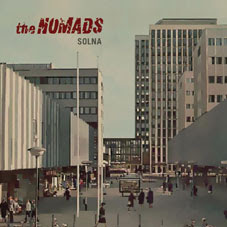 Which brings us to the Stockholm 'burb of “Solna”, also the title of the new Nomads album. Now I’ve written many acres about that band over the years and they’ve never ever let me down. I believe them to be like family. So it was pretty great to see such deserving folks as they crash the Swedish album charts lately. So I mention them here because they’ve made a really fine record. Perhaps their best, all this way down the road. Never resting on their laurels or diluting something that was never a good idea in the first instance just bashing out their primo gear as only they can.

And, had it not been for them, there would be no Imperial State Electric, or Hellacopters. Someone asked me recently if I thought “Miles Away”, the album opener was trite. And while I recognised what this person was getting at – having gone back and studies it to some degree – I’m pleased to report a resounding “no fucking way”. Rather it sets out the stall perfectly for what follows.

The 45 version on Universal has a stoating Tommy Ferdi Andersson song entitled “Something Good, Something New” on the flip. The Devils Jukebox release has “American Beat” on its reverse. And “Make Up My Mind” is just one of the greatest wee pop tunes that I’ve ever heard. Yes, ever. Maybe one day it’ll be a 45 too because it sure deserves to be. The vinyl edition or “Solna” includes “Fine Fine Line” that sounds like Mud taking a crack at “Jukebox Babe”. Glam-mungous!!

It may have taken a wee whiley to get this together but it was sure worth it, excellent work gents and gracias for continuing to deliver the goods.
Posted by Lindsay Hutton at 2:40 PM 1 comment:
Newer Posts Older Posts Home
Subscribe to: Posts (Atom)