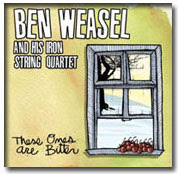 Ben Weasel and his Iron String Quartet –
These One’s Are Bitter (Merdota Recording Co.)
I came to Screeching Weasel relatively late and somewhat by accident. Having had them pegged as some kind of terrible hardcore group. Not sure why exactly but I couldn’t have been more misguided. And it’s fairly clear to anybody with a penchant for rollercoasting pop that Ben may well have been able to save The Ramones. We’ll never know for sure but I reckon that he and Joe King could have been their Leiber and Stoller. So anyway, he's moved on and will always move and shake a good sight faster and louder than any alleged talent that thinks they’ve got something to offer. Shuning the trappings of conventional popularity but toting all the chops to leave the competition, if there was any, in the dust. This guy has nothing to prove to anybody but he’s just made a benchmark album by enlisting the All American Rejects to provide the ballast. The result is 14 tracks that should be lighting up the airwaves if there still were such a thing. The sound is immense, like The Who crashing skulls with The Dickies to create a dynamic that’ll flash up a dirty big dumb grin right across your mush. "These Ones..." is only available as a download for now but it will be available on vinyl and as soon as that happens, you’ll find out where to score one here as close to first as I can muster. The one slow song “In a Bad Place” is a heartbreaker which could pack out a stadium on its own if there was any justice or indeed if the guy who wrote it gave a shit about such hollow trappings. The Leftovers – On The Move (Rally Records)
A quick google on the name throws up many bands called The Leftovers but this is the three piece from Portland, Maine that we’re dealing with here. Imagine The Smithereens wearing jetpacks and harbouring some Tommy James and The Shondells intent. 13 songs clocking in at just below 29 minutes, looking at them on the cover, you’d never think that three youngsters could kick up such a full-blooded racket. They’ve been abetted in their mission by the aforementioned Mr Weasel and his sequencing has been carried out with precision rock’n’roll action in mind. This is what I expected The Fratellis to sound like according to their press. Superior pop hammered out with a gusto that’s rare in these processed pre-packed, pigeon-holed times. I’m sure that yours truly is well outside their demographic but they’re bloody stuck with me. The sound is as clean as a whistle and that drum propulsion really carries the epic proportions of the “teenage excitement, romance and mystery”. The Leftovers are anything but.

The music will always transcend the T-shirt. Won't it?
(Thanks to Mr Percival for the link)
Posted by Lindsay Hutton at 4:27 PM No comments:

The Soho Dolls are embarking upon an extensive expedition to take their electro-glam-twang stylings to the highways and bye-ways of the UK. In the olden days, an appearance on TOTP and a cheeky wee Saturday morning TV spot would have been enough to drive the kids out to the record store with their pocket money but things are different now. It's the 21st century apparently. The tour is to promote the album "Ribbed Music For The Numb Generation". Anyway, check out their wares on YouTube and Myspace and get ready for some real old-fashioned future pop. 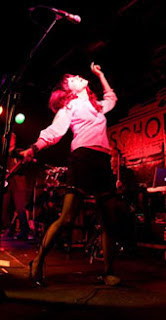 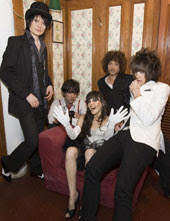 (Thanks to Maya for the info)
Posted by Lindsay Hutton at 6:06 AM No comments: 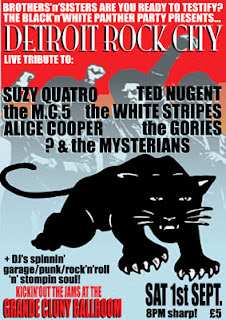