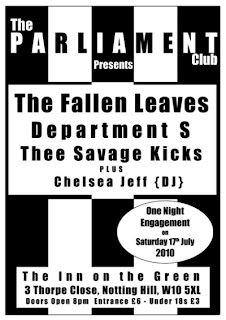 Posted by Lindsay Hutton at 7:20 PM No comments: 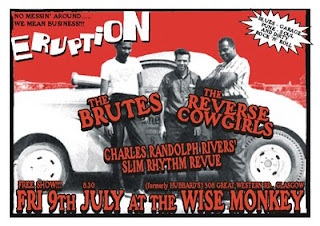 I’m not entirely sure if the weekend went according to plan or not. Certainly, some progress was made along the way to try and restore a sort of order to the bunker. Not a lot but some. It was good to spend less time in front of the computer screen and the rather meagre number of posts here is something you might be becoming accustomed to over the next wee while. There’s not a lot of urgency on anything right now and maybe it’s just reflecting the same sort of silly season that you get with traditional newspaper media. They get thinner at this time of year to the point of anorexia.

Mr Spence has been in touch about an Eruption that’s about to take place but don’t worry, there will be no ash cloud preventing your globetrotting. This particular rumpus is exclusive to Glasgow’s West End. Here’s his pitch...

"The legendary ERUPTION is back for a one-off show of the usual high standard of rock'n'roll in Glasgow this Friday - and it's FREE, just like the good old days!! THE BRUTES; THE REVERSE COWGIRLS and CHARLES RANDOLPH RIVERS' SLIM RHYTHM REVUE at the WISE MONKEY (formerly Hubbard's), 508 Great Western Road, Glasgow G12, nr Kelvinbridge underground. First band - 9.30; and did I mention it's FREE?!!"

In its former guise, this place did the best sticky toffee pudding in town

In other news, the very Rev. Niklas Vahlberg has alerted me to a show that will see the mighty Nomads and Problem get together to rattle the rafters of Kulturbolaget in Stockholm. This will go down on August 21st and will be a momentous night. I’ll be reminding you of this in the run-up but you should go. Really.

And as the Nortonians head for Europe, here's what they're cooking up for us over the next few months. All the rock'n'roll you could ever need and they're even branching out into gospel, but definitely not as you know it! Here's the scoop!