I want a job coming up with this kind of tosh...
Posted by Lindsay Hutton at 5:28 PM 2 comments: 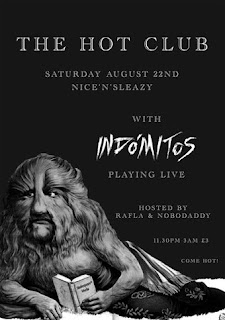 Posted by Lindsay Hutton at 4:57 PM No comments:

Attention Ramones fans of Espana... A message fro the Rt. Hon. Monte Melnick via his myspace...

"I'm very happy to say my book “On The Road With The Ramones” will be out in a SPANISH EDITION. My Spanish publisher is MUNSTER RECORDS & BOOKS. The end of September I will be going to Spain to do special press events and in store book signing appearances. More information will be posted later.

Rock On! Monte
Posted by Lindsay Hutton at 3:44 PM No comments:

Ah, best time of the week, getting home as a Friday segues into the pm. Getting to the car prior to the journey might the farthest point from Monday but I've gotten used to this arrangement of being able to take care of niggly business during this weekend add-on. Plus it's not chucking it down, probably waiting until I get 50 yards down the road but, ach - bring it the eff on!

What a difference a day makes eh? On Wednesday, Scotchland was a top place, the veritable Brigadoon. As of about 1.25pm yesterday, in a monologue resembling the faux-suspense of an X Factor final crossed with a sermon by an I.M. Jolly impersonator, Kiltland’s rep plummeted. I imagine that immigration departments across the US are ordering up boxes of rubber gloves as this is being blogged. However, sales of "kilt towels" to Libya are set to explode (I couldn't resist that). Boom Boom (Ouch...).

The only avenue left is to poke scorn at this decision as there is quite obviously some very scummy stage management going on here. I'm not sure how the Christmas shopping will be in our new best friends' country. Anybody clue us in to the price of Levi's out yonder? So Bertie Bassett Tanyergranny or whatever his name is/was (not to be confused with the liquorice allsorts guy) has left “the building”. Compassion is all very well as an idealistic theory but in the stark glare of the boom lights it doesn't play out. I really can't wait to see "The Daily Show" tonight (we get it a day late).

Still there was good news yesterday too. Ms Hazel Rigby was reunited with her stolen guitars, swiped from her place in New Orleans. Let’s hope that’s the one and only time that her space is invaded and that she goes on to have a positive association with the place from here on in. And further non-despondency, I learned today that Annika (Norlin) has a weekly column in the Stockholm "City", the twice weekly equivalent of Metro.

A cooler commentator in any language you won’t find...
Posted by Lindsay Hutton at 2:45 PM No comments:
Newer Posts Older Posts Home
Subscribe to: Posts (Atom)