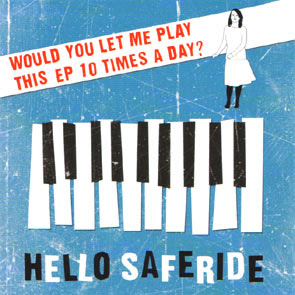 “Would You Let Me Play This EP 10 Times A Day?” is the new Hello Saferide EP which comes out on June 14th. You can order one now HERE. It follows seamlessly on from the “Introducing…” album that’s been on heavy rotation here since its arrival that seems like only yesterday. There’s a raucous quiet majesty to this material which makes it seem almost understated. The neuroses are intact and Annika’s apparent losses are very much our gain because these songs, lyrically and structurally are sublime. By the time the torch-soul classic “Leaving You Behind” fades out you’ll feel like you’ve been through the wringer. The Colliery band style brass will give you chills or at least it does me. These 5 songs are world class snapshots of what real music is capable of. When all the hype and bullshit that we’re bombarded with daily/hourly is washed away then there’s something like this to pick you up no matter how far you reckon you’ve fallen. Recorded and mixed in less than a week, HS oozes grace. The like of which many lesser acts could never capture in four times that. Here’s to the next big Swedish export, remember where you heard about it – perhaps not first – but at least early.
Posted by Lindsay Hutton at 8:58 PM 1 comment:
Lost the plot somewhere between last night and today. Meant to list a bunch of shows like the last live music night at STEREO in Glasgow, presumably before it moves to its new location. There's also the Shock and Awe/Electra thing at Opium in Edinburgh and Robin Guthrie at The Cameo cinema. These are happening tonight and if you're looking for last minute kicks then go for it.

A little further afield there's HEAVY TRASH in Newcastle this coming Tuesday (June 6th) at The Cluny. This is the furthest North they're coming so...

I had to make a move in tidying up the HQ garden area and now I'm paying for it allergy-wise so nae gallavanting for me. Incessant sneezing during a set is not an attractive quality to my mind, particularly if it includes spray. So best stay in the bunker, Bigor and Ziga will be on Radio Student tonight doing a show about the recent All Tomorrows Parties weekend that included the Mudhoney-curated day.

The brief spells of what passes for summer seem to be upon us. I saw sights earlier today that endorse this belief and there's only so much bright white blubber a guy can stand. Surely "let it all hang out" shouldn't be taken so literally, particularly around eating times. But heck, it takes all sorts and the rain will be back soon enough. On that upbeat notion...

Update at 8.22pm... the Radio Student ATP review is in full swing and where else could you possibly catch The Scientists back to back with Teenage Fanclub? Not in this chuffing country that's for sure.
Posted by Lindsay Hutton at 6:27 PM No comments:
Newer Posts Older Posts Home
Subscribe to: Posts (Atom)