Just came off listening to a two hour celebration of The Geator with The Heater that Ben Vaughn put together to celebrate 50 years of the man on Philly radio. The show will be broadcast on July 3rd and I’ll post the link then, incidentally Jerry Blavat (The Geator) will be 70 that same day. 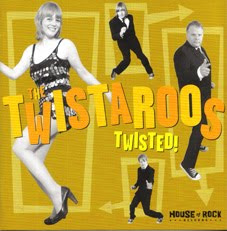 Which bring us to the House of Rock, an establishment situated in Moss, Norway and they’ve just started a label, the first release of which is just about the only credible way I could think about following what I just heard. The Twisteroos could be considered to be the Scandinavian Detroit Cobras but they’re actually much, much more than that. For a start they have the one and only Ms Vibeke Saugestad on board. When they request you to jump on board and head for “Where The Action Is” you just do it. “Twisted” is the party album of this or any other summer. Mr Henriksen, Mr Dahlmann and Mr Frehley Jacobsen let fly with a brew that leaves their Michigan cousins standing. Effervescence is the key and this is the veritable creamola foam. Cool covers and credible originals nuzzle together in a completely unbreakable embrace. They’re serving up “Chills and Fever” and I urge you to grab some.

You always wished that The Rezillos would make another record, right? Well this is as close as you’re likely to come to that with a whole lot of cream on top. 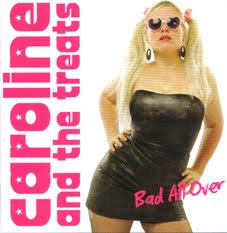 HORR2 is Caroline and the Treats “Bad All Over” and I’m pretty sure that The Dave Clark Five never saw this coming. Girl-powered pop punk never goes out of fashion and this revitalises all of the parts that were killed off after seeing The Runaways movie. A direct descendant of that, Caroline Andersen is Joan Jett to Morten H’s Kenny Laguna knocking off the short sharp nuggets bang bang style. “Make Out With You” is where the Ohio Express take on “I Wanna Be Sedated” to create a monster. Wah-ooh!! There’s that Ramones/Riverdales wallop running from front to back here and I do know that you kids, like me are suckers for that. There’s a couple of songs here that I could hear The Boonaraaas!!! doing too. I like the way the rock aesthetic rubs up the sixties and seventies garage disease. That angle keeps things fresh rather than just authentic. Something like the harmonic guitar “solo” that slides in on “It’s Cool To Rock” underpins the message of the song and straddles that fine line without any degree of chafing. Excellent rip-roarin’ version of The Angels “Wow WowWee” here too. 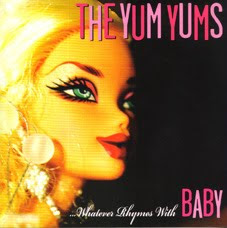 And with the adage that things happen in threes, HORR3 is a domestic release of “... Whatever Rhymes With Baby”, an album for all seasons that contains at least three songs of inordinately huge proportions. If there was such a thing as joined up Rock’n’Roll Radio where consensus could drive a tune into an international breakout hit then The Yum Yums would be stadium rockers.

They make music that is twice as infectious as any of these idiots that you might have seen on Glastonbury this past weekend. I saw something called The Cribs that are supposed to be some great shakes but there was something missing. Oh, I know what it was now, songs. Anyway, this version of the album is different to the Wild Punk version in that 4 numbers have been re-recorded with recently acquired drummist – Ulf Bendiksen.

All 12 songs here pretty much define the art of the pop song the way I like to hear it. They have a chemistry that has taken years to perfect but if this stuff was any more potent then it‘d be downright dangerous. This here is for teenagers of every vintage and it may well contain some sonic elixir for eternal youth as it's been known to make grumpy old bastards punch the air. And smile even.
Posted by Lindsay Hutton at 3:45 PM 2 comments:

Courtesy of Angel Aparicio Trujillo via facebook... this is a GREAT 45!

Posted by Lindsay Hutton at 11:08 AM No comments:

(Thanks to Dr H for the link)
Posted by Lindsay Hutton at 9:14 AM No comments:
Newer Posts Older Posts Home
Subscribe to: Posts (Atom)