(Thanks to Sébastien Favre for the link)
Posted by Lindsay Hutton at 8:10 PM 1 comment:
Kid Congo Powers' Lux post (link via Staysick)

Posted by Lindsay Hutton at 12:36 PM No comments:
Blimey, thanks Russell (via PKM) 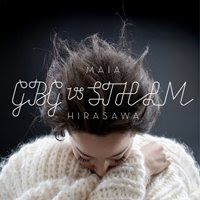 The inimitable Maia Hirasawa makes her US debut tomorrow night (Thursday 12th) at The Hotel Cafe in LA. Onstage at 11pm, a wee bit late but she's worth staying up for.

Maia's debut album is available in the USA on Thrive Music as of this week. Her follow up, is released in Sweden on March 25th. Watch this portal for more info.
Posted by Lindsay Hutton at 11:39 AM No comments:
I wrongly thought that this was Matt & Kim from the Bowery Ballroom in NY last night... in all the excitement I didn't check the date properly... you should watch it anyway... photos from last night here.

Posted by Lindsay Hutton at 11:28 AM No comments: 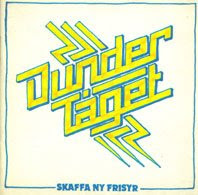 Dundertåget translates as Thunder Express. It’s the post Hellacopters domain of Robert "Strings" Dahlqvist so you’ll have some high hopes registering on the monitor there. Well, prepare for those to be surpassed because the band’s debut is what you rock-starved kids have been waiting for. Forget all those identikit losers, and I include Primal Scream in that. "Skaffa Ny Frisyr" is "Get A New Haircut". I remember Peter Zaremba saying "If you can't let it down then baby, take it off". I'm not sure if one's barnet material falling out qualifies but...

"SNF" is several shades more fun in every department than the latest AC/DC. When that guitar kicks in during “Ifrån Mej Sjålv” (“From Myself” – thanks Ulf) you’ll be reminded of the majesty that this maligned genre can conjure up. It’s almost as exciting as seeing Alice on the OGWT in 1971. “Lika Som Bår” extends a Big Star type pop sensibility into an arena rock setting and makes me thing they should cover The Box-Tops “Soul Deep” in their native tongue. Full scale lighters ahoy for “Vi Ses Nog Aldrig Igen”.

Not that is sounds like a museum piece. I get pelters for claiming that this stuff sounds fresher than The Clash. I believe it does so get the fuck over it. The events of the past week have taught me not to compromise any belief system, however flawed it might be.

Produced by the swingin' triumvirate of Mattias Bårjed, Konie and Robert himself, the only downside against 'em sweeping the planet is that it’s all in Swedish. In many ways however, its a strength too. It’s a commanding language to present this music in. Scandanavia in general has an inherent rawk gene that most cultures bred out long ago. They imbibe it with a glamour that pretty much fled the UK and replaced it with pantomime hairy bikers. And that's just the women. Actually I'm half-kidding but only half mind. The band also includes Jens Lagergren (I Are Droid/Hello Saferide), another guy that you can guarantee will be synonymous with quality. Not content with knocking out a great sound, they’re also sporting a “Starz” type logo that is begging to be stencilled and spray painted on every conceivable garment and surface you can find.

Go listen now, lose yourself for a bit. I wish I still had the hair to do them justice… people always called me a dunderheid anyway so maybe it was affectionate, who knew. Oh yeah. It’s on Razzia, natch. Home of the hits!!
Posted by Lindsay Hutton at 9:56 AM No comments:
Rock Trauma. Not a Flintstones character but the online bi-product of Happyland.

(Some of it this ain't work-safe but what fabulous writing - thanks to HT for the heads up)
Posted by Lindsay Hutton at 8:51 AM No comments:
Newer Posts Older Posts Home
Subscribe to: Posts (Atom)