All round nice guy Niels from the Sack-O-Woes has gone the bloggin' route as well: Eet U Smakelijk.
Posted by Jeroen Vedder at 8:20 PM No comments: 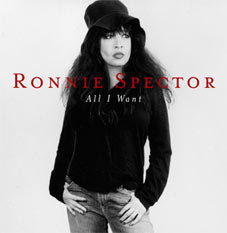 Heard Ronnie Spector’s version of Amy Rigby’s “All I Want” on the Tom Morton show t’other afternoon and cool as it is with Keef on it and all, it sounds a little clean compared to the original. However, having your song covered by one of the greatest singers that ever opened her yap must be pretty exciting.

The album “Last of the Rock Stars” is released on the High Coin imprint. It doesn’t seem to have that Elliot Murphy tune on it though. If only it could go as far and wide as Tina Turner, it certainly deserves too. Tony Thewlis figures that Keef got his Ronnie’s mixed up and turned up at the wrong session. As Judy Tenuta would say in her trademark brogue, “it could happen”.

Update @ 6.50pm - Amy tells me that AIW will be the single from Ronnie's album.

And talking of Mr Thewlis who is connected with this post in more ways than one, on Friday April 7th, there’s a case of conflicting gigs in London. Amy had Tony in her combo for yon recent UK tour but said combo will be fulfilling their role within Chris Wilson’s Groovin’ Flames at Dirty Water that evening. Across town (?) at The Plough in Walthamstow. Ms Rigby and Mr Goulden will be providing the entertainment that self same night so fill your boots pop pickers! The latter pair also have shows in Bristol, Brighton and Buckingham around that feted day. Next time they'll be playing places that all begin with C.
Posted by Lindsay Hutton at 3:50 PM 1 comment:
Today is a tumultuous one in terms of Scots life with the smoking ban in pubs and clubs coming into play. The practice of coming in from a night in either honking of smoke is likely to be a thing of the past although it'll be weird being in The Horseshoe Bar in Glasgow and there not being a smoke haze. However, running the gauntlet of puffers outside of such establishments might result in the odd waft or seven adhering to your garments as you scuttle past wearing oxygen equipent. Or those masks that japanese people wear to keep out the petrol fumes and day to day guffs that go around. It’ll be interesting to see how it all pans out. Most probably in fisticuffs but if it can work in NY and Ireland then who knows.
Posted by Lindsay Hutton at 7:26 AM 4 comments: 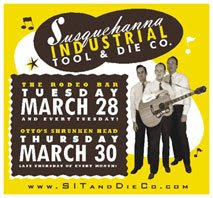 "Hello Friend,
Care to double your hillbilly pleasure? Susquehanna Industrial Tool & Die Co. offers two such opportunities in one week, with not only our weekly Rodeo Bar Tuesday, but also our monthly dose of Otto's Shrunken Head, the happiest place on earth!

Double the pleasure, indeed! Sincerely yours, Michael"
Posted by Lindsay Hutton at 7:20 AM No comments: 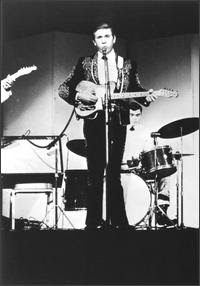