Posted by Lindsay Hutton at 6:48 PM No comments:

This is real. I didn't make it up but I was pretty thrilled to learn that this thing actually works. My thanks to Filippo for agreeing to let me reproduce it... although I think we'd like to see the picture, right?

I just wanted to thank you. I have been following and loving Shonen Knife for 20 years but weren't it for your account of Glasgow I doubt I would have gone to see them. As previously mentioned on the comments of your blog I live in Italy and the whole trip to Barcelona (trains + flight + crappy hotel) cost me more than 300 euro, which is quite a hole in my pocket. But it was totally worth it. Totally.

The venue was small (according to a sign the capacity was 300) and far from being full. Yet they gave everything, played an amazing show and even did an encore. Local people explained to me that it was the normal turnout for a gig of this kind in Barcelona, still I was hoping for a much bigger audience. They deserve to be huge.

On the other hand that allowed me to be so close to the stage that when Ritsuko was headbanging on the edge her hair touched my face and Naoko was just a few steps away. I was happy like a child throughout the whole set.

Before the show they were locked out of the club with the public for a while (it was quite surreal). I could not resist and I asked them to take a picture together and exchanged a few words. On the picture I have an unbelievably stupid grin on my face. I'd never thought I'd be such a fanboy at 40. They were incredibly kind and after the show they were selling their own CDs and signing them for everyone.

It was the best show of my life (a spot previously held by Arthur Lee) and a very, very happy night.

So thank you again. You were pretty convincing ;-) 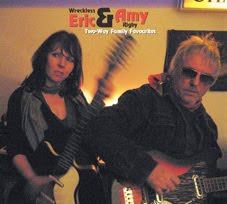 The state of this particular nation is relative disarray. Still it could be worse and progress was made on the landscaping front. I call it landscaping but it was really tidying the drive, mowing the lawn (neither of these are euphemisms), that kind of thing. Tonight, there will more manual labour out there. It’s the bane of my life but sadly necessity, because no-one else is going to do it. Gardening, in any form is not the new rock’n’roll, going out, in or a substitute for black. It is a soul-sucking exercise in tedium. It could well be an art form in the hands of others, not me.

The only TV I watched over the weekend was Peter Bogdanovich doc about Tom Petty that aired on BBC Four. It was really good and despite lasting nearly 4 hours it was an attention grabber. Would have been good to have had a wee bit more of how it all blew up in the UK but otherwise I found it both informative and entertaining. And I never dropped off during it so that’s perhaps the highest praise of all.

Wish I had the energy to go and see The Dum Dum Girls at Stereo tonight. The album is good and the lead gal’s name is DeeDee Dum Dum. I like that, another combo that subscribes closely to the blueprint of the Shop Assistants. There have been a slew of those lately.

Ronnie James Dio’s exit was a bit of a shock. It was just a week ago tonight when Naoko Knife namechecked him prior to launching into “Muddy Bubble Hell”. It was a surprise that he was 67 too. It’s difficult to get a beat on exactly how old people are, particularly when one is particularly aware of their own advancement in years. Still if your number is called, these “hail satan/devilhorns” have to count for something. Can’t say I was ever a fan but he was a character, and we need more of those, not these chinless divots that seem to become popular these days.

This ash cloud thing is getting to be a right pain in the ‘arris. Being that it seems to be a regular occurrence, I’m wondering how it’ll affect my quick hit and run on Barcelona in a couple of weeks. Hopefully not at all because I don’t want to be fannying around checking with the airline. Paranoia and an expectation of inconvenience are combining to bug me. With every news report I see, my toes curl ever further.

It’s a year ago tomorrow that the Rev. Lennart Persson left the theatre. Hardly seems possible. It’s also Sir Eric Goulden’s birthday – many happy returns to this “alien of extraordinary ability” as it states on his US visa. As it is he should be given the freedom of the whole galaxy, not just a poxy country. Eric and Amy have a show scheduled for “Stereo” in Glasgow on Friday September 17th. Verily a cause for celebration. Do this by ordering a copy of “Two-Way Family Favourites” in advance or hold on to your dosh until you see them play. Or both. While you tune into episode 26 of the radio show!
Posted by Lindsay Hutton at 5:40 PM 5 comments: 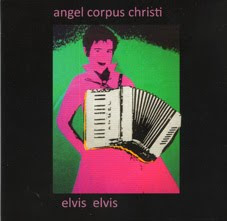 "Elvis Elvis" is a seven song celebration of The King that comes courtesy of Angel Corpus Christi. It’s an ambient, quasi-Badalamenti take on the Presley oeuvre and I can pretty much guarantee that you haven’t heard these songs like this before. Aficionados of David Lynch soundtracks should dive right in because the atmos is just the way you like it, tweaked rather than twisted.

The way this all came together is something of a departure from the normal ACC way of working, there are many more instruments and the accordion isn’t so pronounced. It’s a little disorienting in that respect. “Teddy Bear” (you’ve already seen the video – right?) is nothing short of breath-taking. With its torchy, trip-hoppy doo-wop-a-bop pacing, it’s a little Lola Dutronic in construction. Man, it’s great to have her back on the airwaves. “Don’t” has a spare, red-room, after midnight jazz feel. I think this would be Dale Cooper’s favourite cut. “Are You Lonesome Tonight” reminds me of Berlin transposed to some Parisian after hours joint.