Heard about this when I was at the hospital visiting my mum. Odd because, next door to the first flat my parents had, when I was only wee - a rumour spread around this peculiar little town. That DJ was coming to visit his aunt that just happened to live next door.

I don't know to this day if these people were related or not but it ended up in a huge crowd gathering and guess what. He never showed.

But anyway, sad news. Seemed like a nice wee bloke.
Posted by Lindsay Hutton at 7:57 PM No comments:

WFMU - HOME OF THE SUPERHITS...
Posted by Lindsay Hutton at 7:52 PM No comments:


Mr Percival figures you need to know about this...

LIVE AT LONDON’S O2 ACADEMY ISLINGTON with special guests including:

As a new year dawns, KING MOB are looking forward to working hard on the live circuit, with dates already scheduled for the UK and the rest of Europe and summer festival dates in the offing. Many more dates are still to be officially announced but KING MOB will play London’s O2 Academy Islington on 28th March with some very special guests including Phil Manzanera, Glen Matlock, Wilko Johnson and Mick Ralphs.

KING MOB began life when vocalist Stephen W Parsons approached his old friend and ex-Sharks colleague Chris Spedding with the idea of forming a new band. Following a highly successful film and advertising career, Stephen had taken time out for a while and found himself DJ-ing at The Axe club on Hackney Road. Every Friday and Saturday night from midnight until 6am, the joint jumped to Stephen’s old school music in the form of Led Zeppelin, The Doors, Ike & Tina et al. Realising that these pre-1977 sounds were going down a storm with the younger crowd, Stephen’s passion for the sheer excitement and energy of R&B was re-ignited and happily Chris Spedding agreed to come on board to form a new combo of talented like-minded musicians from either side of the generation gap.

For further information on King Mob head to:
www.kingmob-beatgroup.com
www.facebook.com/KingMobBeatGroup
Posted by Lindsay Hutton at 5:40 PM No comments:


(Thanks to Tony for the link)
Posted by Lindsay Hutton at 7:40 PM No comments: 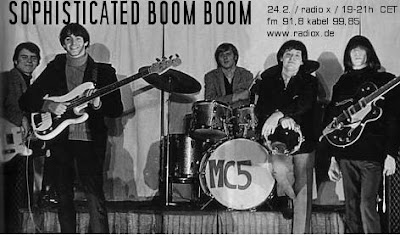 Posted by Lindsay Hutton at 6:42 PM No comments:

Uh, oh - thanks to Cranny who points out that Michael isn't on this clip. He is on this though. Heid on upside down moment.

Posted by Lindsay Hutton at 7:52 AM 2 comments: 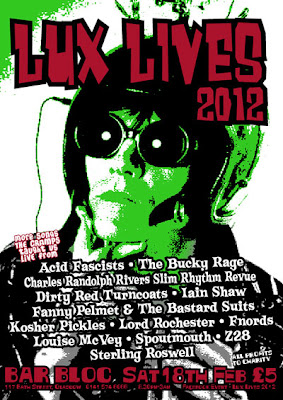 As with the Edinburgh gig, I harboured an inkling that I might make it along tomorrow night but it seems unlikely. The last few weeks have taken their toll. Hell The Glasgow Film Festival is on too and I only just glanced at the programme the other day.

It would appear that events which would have been rubberstamped with "priority" are taking a backseat to the heavy dose of reality that we hereabouts find ourselves tussling with.

So check out the Lux thing on facebook and go along if you can. If they creep into the black, the money will go to charity

Posted by Lindsay Hutton at 4:34 PM No comments:


Posted by Lindsay Hutton at 7:04 PM No comments:

Posted by Lindsay Hutton at 8:09 AM No comments:

Always liked this song, sorry about the ad intro...

Posted by Lindsay Hutton at 8:13 AM No comments:


Just heard about this but can't find a link...
Posted by Lindsay Hutton at 11:30 AM No comments:

Posted by Lindsay Hutton at 9:01 AM No comments:


It’s been a few days since I’ve been on here. There’s a lot going on with my father having exited the theatre and any lollygadding will have to wait. Thanks to all of you folks that chimed in over the past wee while. It’s greatly appreciated. Our mother was just moved into a local community hospital so we’re anxiously waiting to hear what’s happening next with all that. Things are a wee bit bit tense.

The funeral itself went as well as these things can go, even managed to shoehorn a mention of The Dahlmanns and also Elvis into the eulogy. Angela Boyd played a spine chilling “Lament for Mary MacLeod" during the service, a request made to me when I dad-sat on Christmas day. It was cool to be able to grant that particular wish.

Dealing with the aftermath is a one step forward, two back dance formation. It’s not even possible to place an ad in the local rag without encountering regulatory bullshit. We’ll deal with that later. “There’s A Piper Down” could only appear in the listing in italics, at the end. In the online version it looks daft but at least it’s in there.

Close friends and associates will recognise this phrase from “So I Married An Axe Murderer”.

Tonight is my first night off in a long time. I’ll probably be asleep by 9pm.
Posted by Lindsay Hutton at 7:37 PM No comments:


I guess I’m not ready to write anything on here about my dad yet. Will I ever be?

That’s what I’m asking myself right about now. Well-intentioned people are telling me that we need time to grieve but there’s stuff to be done. My brother and I, along with the family are all pretty pragmatic. We have no interest in what is or is not appropriate. Not really. Some antics that some people think are appropriate are distinctly not so. But we’ll give the guy a send-off and a half if at all possible.

But here’s what I’m grieving about to the point of apoplexy. How could people as good and kind be reduced to what’s happened to both of our parents in recent weeks? My dear, dear friend Amy Rigby wrote a song called “Don’t Ever Change”. It’s more of a hymn that most any actual example of that. It includes a line, “I don’t have religion but I’m trying to pray”.

I’m trying for sure but this proves conclusively that this god business is bollocks. If he (it can’t be a she) exists then let it be known that he’s pissed up my back so payback is coming.

Actually, I do have religion – RAMONES. And let us not forget Lux in all this but until there are churches to celebrate them colour me out.
Posted by Lindsay Hutton at 9:52 AM 3 comments:

RIP - Ben Gazarra
Posted by Lindsay Hutton at 7:32 AM No comments:


My father passed away after a long tussle with the dreaded cancer on Tuesday afternoon. Iain an I are on a steep learning curve trying to take care of this sad business and it ain't exactly a cakewalk. I'll write something about him later but it's all just a little raw.

So hang tight. There's likely to be a period of inactivity whilst we try to make sense of all this and support one another through the firefight. Thanks to all of you who send good vibes. You know who you are.

I guess I won't in be seeing The Fleshtones at El Sol on Friday after all...
Posted by Lindsay Hutton at 7:49 AM 1 comment:


My father's pipe band (nearly) played on this...