The majesty of proper rock is something that has been diluted and putzed with to severe detriment in recent times. I cite Kings of Leon as being a particularly heinous version of this. It’s pretty incredible then a couple of bands, from Spain and Sweden respectively have turned up recently with something that doesn’t rely on authenticity like repro antique furniture does. They don’t sound like tribute acts but rather bring the excitement and air punching abandon back in addition to laying down some mighty riffola. It’s the sound that brings the ladies round as a sage exponent of the craft once commented. 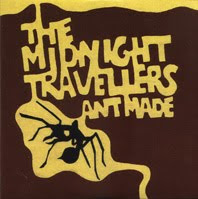 The Midnight Travellers are from Barcelona and their lyrics are in English so this stuff could literally travel. Somehow they’ve managed to rassle some new-fangled way of recycling Stooges riffs with a little vintage Kiss seasoning and a smidge of Foghat that really works. “Time Has Come” really has it all and let’s face it, Spain is the last true outright rock territory. It’s in the blood and the genes. The very fabric of that country rocks. It’s enough to make the most hardy cynic (me) believe in the power of loud guitars, bass and drums pummelled at some inordinate volume. And it never sounds lumpy, even when it reminds me of bloody Pearl Jam.

Joe Traveller and his fellows are set to haul this monolithic caravan far and wide. If they could get a foothold in the European festival circuit then they could literally clean up. This is an honest reading of a riot act that was originally struck in the 70’s. It’s not authentic per se, it’s more dangerous than that because it comes from these kids hearts and souls. They believe and have the power to make you do likewise. “Ant Made” is out now on CD and vinyl courtesy of Wild Punk. As yet they don’t have a sister imprint known as Wild Rock but they might want to think about that. 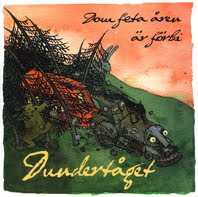 So to Sweden now and the second volume of Dundertåget’s uncompromising celebration of the form, “Dour Feta Åreu Är Förbi” on that rad imprint known as Razzia. All the songs are in their native lingo. (Did I dream that they were going to issue this in English too?) and that’s the only thing that’s standing between these guys and world domination. Having picked up the baton that The Hellacopters failed (through no fault of their own) to beat any sort of sense into the public with, they’re going all out. Their own substantial abilities, when abetted by Martin "Konie" Ehrencrona at the sonic catedral that is Studio Cobra makes for a heady concoction.

In addition to delivering some mighty guitar slinging, there are other avenues explored. “Vingars Brus” is a duet with Nina Ramsby of Grand Tone Music and features viola, cello and something called a tonegenerator. They’ve been honing an already sharp ear for a dynamic and this one collects every shard of hard rock grandeur and pulverises it into a diamond of a sound that seems to resonate more these days than much of the chicken in a basket punk nostalgia that’s doing the rounds.

It’s not all hell bent riffing, there are a couple of more reserved songs there to bolster a sense of depth, light and shade. This might have its roots in the past but this stuff sounds as fresh as the proverbial daisy. Again, the strength lies in the songs not being just modules or approximations that plunder a theoretically stellar record collection.

Let a little Thunder Express into your life. Dundertåget is good for what ails yer.

Update at 7/5 - Yes, the "English" thing must have been a dream... Thanks Robert.
Posted by Lindsay Hutton at 8:11 PM No comments:
Newer Posts Older Posts Home
Subscribe to: Posts (Atom)