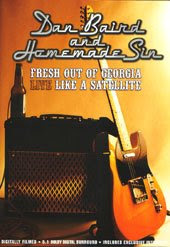 There was one night, a few years ago, that Dan Baird was in town on the same night as J Mascis and The Fog. It became apparent that Ron Asheton would be playing with Mascis but I never dug Dinosaur Jr or Snr so why the fuck would I go to that on the off chance they might do a Stooges tune. Who figured it would be the blueprint to Iggy's pension plan? Truth is while I’d have liked to meet Ron and that I’ve come to dig J’s film score work, I plumped to vote “Baird” that night.

I took some shit let me tell you but my roots rock shoots wouldn’t let me betray the fact that an evening in this guy’s company is always bloody entertaining. He’s an entertainer, in addition to being a first class rock’n’roll act. “Fresh Out Of Georgia, Live Like A Satellite” (granted - the title is a little cringeworthy but them's the breaks) outlines that fact but good as it is, the atmosphere at a show is something else. This guy brings the authentic roadhouse with him everywhere he plays. The song “I Love You Period” is an all-time favourite as are some of his others and they’re pretty much all here.

The dynamic of “All Over But The Crying” is a particular example of why he deserves to be playing bigger places but be thankful that he isn’t. Because that way you’ll get the full force. No huge moat filled with security or hangers-on.

You get Tom Petty to Springsteen via The Faces and in some regards Baird is better than all of those. You get the impression that he’s doing things the way he wants to and that’s no mean feat these days. With the exception of the Quireboys guy crashing the party at the top of the set, this is a good primer for the real thing. Elektra is spelled wrong on the captions during the interview section, what is up with that? That sort of neglect to detail kinda gets my goat.

One viewing and I doubt you’ll want to miss his next visit to your neighbourhood. Some of this might qualify as “City Rock” even? "Battleship Chains" Steve, whaddaya say??
Posted by Lindsay Hutton at 2:08 PM 1 comment:
Now I can get into this thing... hopefully it'll let me post also... you'll hear the cursing wherever you are if it it doesnae...

Excellent interview with Jeremy Gluck by Jean Encoule at Mudkiss.

While you're there, mull around a while. It's a fun joint.
Posted by Lindsay Hutton at 1:36 PM No comments:
Newer Posts Older Posts Home
Subscribe to: Posts (Atom)