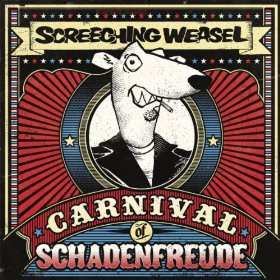 Well, it was to have been a big surprise. October 29th was to have heralded a return to the ring by Ben's new turbo-charged version of "The Weasel". However, Amazon UK let the cat out of the bag so punish them by ordering your copies directly from Recess.

A short, sharp boot up the jacksy to those who threw the guy under the mode of public transport namechecked on the EP closer.

Integrity intact, Ben has emerged bruised but somewhat unscathed from the brush with unbridled stupidity that set his plans back after SxSW. Everything happens for a reason, or so they say. His ex-bandmates really should have stuck by him - instead they provided the fuel for him to pick himself up to pen a couple of middle finger anthems that may otherwise never have been written. It's an ill flippin' wind people...

At the time of writing, word of this release having a "hidden track" based on Katy Perry's "I Kissed A Girl" were unsubstantiated.
Posted by Lindsay Hutton at 6:58 PM 1 comment:

The Quattros are playing at my favourite-est venue on earth on Friday and I can't attend.

But maybe you could attend and represent me?
Posted by Lindsay Hutton at 5:36 PM No comments:
Newer Posts Older Posts Home
Subscribe to: Posts (Atom)