BE STIFF
Posted by Lindsay Hutton at 7:17 PM 2 comments:
Saw The Bottle Rockets last night in Glasgow. They're here punting their new Evangeline release, "Zoisia". Theirs is top notch Americana hootch and I'd swear that Brian Henneman was chanelling Lou Whitney at one point. They're in Newcastle tonight (Saturday) and have a few more shows including Amsterdam coming up before they head back stateside. It was somewhat reassuring that they seemed to draw a bit of a crowd also. Obviously the bush telegraph can work because I saw nada in the way of posters for the show. The Sundowns and Stewboss opened. The former locals are OK for two or three songs. Until the one with the James Blunt hair sings. Stewboss are agreeable if unremarkable purveyors of familiar sounding noises. Good, tight but ultimately kind of forgettable. The Rockets have it down and when they're motoring then you better get outt the way. If you want to see what you missed then check the clip for "I'll Be Comin' Around" available via their site.
As I was tapping away here, Mr McLean called with some rotten news. Our friend Gary Barrett passed away yesterday of a heart attack at 42 (!). Gary was a mainstay of Sandy's Avalanche oupost in Glasgow and I never knew him real well but he was a nice guy. And a rabid rock'n'roll fan. He really wanted to find a way to get The Scientists up here when they were over earlier. Alas it didn't happen. One imagines that his spirit will be rattling about the rafters of this week's Radio Birdman show in London though. Things like this create something of a perspective and i'm sure his family are in shellshock. 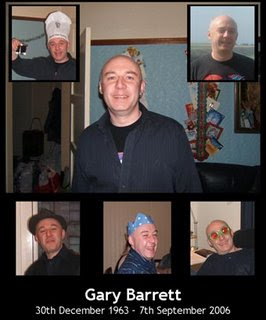