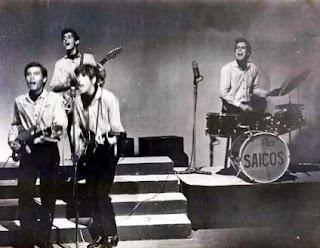 The archaeology of rock’n’roll is much like any other form of digging. Significant finds demand the re-addressing of previously considered certainty. Such chicken and egg semantics are entirely dependent on the consumer’s entry point. Fuck the chin stroking.

I’d never heard Los Saicos until my recent trip to Madrid. I had heard Wau y los Argghs version of “Demolición” and while I could appreciate the inherent wildness, never for a minute considered that the original would have been even more deranged. More importantly this snarling maelstrom of nihilism was cut in Lima when the rest of the world was wetting itself over The Beatles.

Hear and believe direct links to both The Stooges and The Cramps, indeed the track that kicks it off is not unlike something they might have come up with as a James Bond theme. It’s customised. The latter spawned several generations of individuals who would dig deep to previously (mostly) unheard seams of music that just radiated. A strong case in point to my mind that preceded the much vaunted “punk” explosion of the 70’s was Cleveland’s Rocket From The Tombs. If they’d have released an album and stayed together instead of fragmenting then who the hell knows how things would have turned out. Maybe we could have avoided U2 altogether? I was a little perturbed by the claim on the Mickey Leigh/Legs McNeil book jacket that Boner blames his existence on Joey but what can you do. I guess that was meant as a compliment and we should assume it as being so.

Anyway, this would be a wild ride whenever it was construed and this is your first must have of 2010. I can’t conceive of any NBTolyte that won’t be enthralled with this.

The unhinged nature of the song titles is one thing but after you become acclimatised to the inherent strangeness, other aspects become apparent. The rhythms and the way the guitars chime and twang to offset the howling are no mere approximations or interpretation. Chemistry is a far more important factor in the gestation of sound than proficiency or ability. There’s a point where nature takes over and in kicks the call of the wild. I don’t know about you but I have an intense dislike of artists that are nothing more than a modular, cookery book approximation of what somebody reckons might be a hipster record collection.

I asked Erwin how aware he and his friends were of what was happening in Britain and the US at the time and here’s what he had to say.

“We knew the Beatles, they were our idols. We heard the Rolling Stones after recording “Demolición” and also Bob Dylan and others. The primitive nature of our songs is something that came spontaneously out of my head. The band had no problem with assimilating and arranging it. The titles and themes are more humorous than violent and actually, the only song that talks violence is “The Cats Funeral” (El Entierro De Los Gatos). However, we thought of ourselves as bad boys and that must have been a driving force. After Los Saicos - I wrote some really violent stuff, but I would not play it now and I don’t think I was comfortable playing it then either.”

Primitive to the point of primordial, Los Saicos were an important benchmark. Who ever thought there could be a combo out there in Peru that would make The Sonics sound like Simon and bloody Garfunkel? There is quite possibly some other music out there that could well make us re-address this and I look forward to hearing that.

However, in the meantime, take this short course of saicotherapy and rejoice that artefacts like this can still turn up. Such tempo tantrums are precious and prove to us once again that there is nothing new on this earth. Why would there be?