(Thanks to Ulf for the link)
Posted by Lindsay Hutton at 8:31 PM No comments: 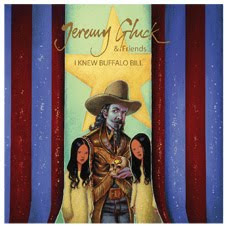 "The first indie supergroup" (more than 20 years ago!)

A unique record with a rootsy, haunting sound, which mixes dark folk, swamp blues and the ghostly side of country music

Expanded edition with many tracks not on the original album (demos, live material and B sides)

In 1987, at the time of its release, "I Knew Buffalo Bill" was greeted as little more than an underground curio. The "first indie supergroup" tag conferred upon it by Flicknife owner Frenchy Gloder was possibly true; in any case, having members of The Barracudas, Swell Maps, The Birthday Party and The Gun Club share its credits marked it out at least as a compelling creative cross-section of the alternative scene of the day.

It was 1986, autumn. Over the years Nikki Sudden and I had discussed, planned and written songs for an eventual collaboration. Nikki was working his music full-time; I was writing and raising my kid. One day Nikki calls pretty much out of the blue and says he is in Fairport Dave Pegg's lush Woodworm Studio recording with his brother Epic Soundtracks and Rowland S Howard, and do I want to tack a week on and do an album? I started packing. When I arrived at the studio one gorgeous afternoon, the band had just laid down the backing track to Nikki's remarkably beautiful 'Gallery Wharf'. I was awed and enchanted.
I still love that song and my good fortune in performing its only recorded incarnation is humbling.

In the years since, "I Knew Buffalo Bill" has been heard more, evaluated further, loved by a few fiercely, liked by many more, overlooked by millions. The unusual combination of players and pieces, and some great production, have earned it a niche all its own. In that time, four of its key players - Nikki Sudden and Epic Soundtracks, Rowland S Howard and Jeffrey Lee Pierce (whom I only met briefly before and during the sessions) - have passed away. It seems unreal to me now that four of them are gone. Great artists, wonderful characters, dedicated journeymen.

It gladdens me that our work on the album has been the cause of one excellent shared homage (Italians Circo Fantasma's "I Knew Jeffrey Lee"), and that one of its latter tracks, 'Burning Skulls Rise' (from the eponymous EP that followed the original album), was covered by Rowland and Lydia Lunch. Subsequently it has appeared on a handful of European compilations and even one modern B-movie soundtrack, for "I Pass As Human", directed by former Flesheater Chris D.

On this deluxe edition I've included all but one track of the original album, demos, B-sides and, to bookend the album, live material reinventing the songs Nikki, Rowland, Epic and I laid down recklessly over 20 years ago. My favourite line of Nikki's, from 'Gallery Wharf' - "What's done can never be put down" - speaks for all of what is here for you to remember, discover or rediscover. It's a strange pile of sounds and songs to have helped create.

Side Three
1. BURNING SKULLS RISE (Demo)
2. FOUR SEASONS OF TROUBLE (Demo)
3. SORROW DRIVE
4. EPISODE IN A TOWN
5. APRIL NORTH
6. THE PROVING TRAIL
7. THEY'RE HANGING ME TONIGHT
8. LOOKING FOR A PLACE TO FALL (Reprise)

Brother P to the rescue with a poster that clarifies Margaret's US shows... 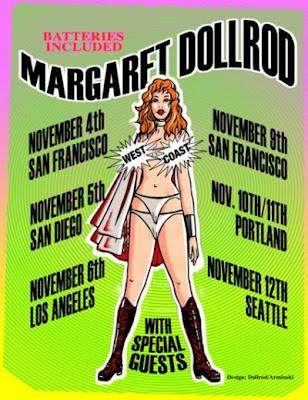 Posted by Lindsay Hutton at 8:03 PM No comments:

Been a hectic few days, kicking off last Thursday evening with Mr Iain Shaw venturing over to the east coast for his fist show there. It went well and would have gone even better if the chattering buggers that bumped their gums all though the set had been muzzled.

Friday night saw The Primevals and Charles Randolph Rivers Slim Rhythm Revue tear up McChuills as part of Oxjam. When anyone tries to tell me how the JJR are some hot shit then I’ll refer them in the direction of the former because those fauxsters are NOT in the same league. Sadly never made it to Buckfest but I imagine that it went well? Sometimes it’s just not possible to do everything just like good guys don't always wear white.

Sunday was the UK premiere of Herschell Gordon Lewis – Godfather of Gore at GFT. Part of a Cult Labs day. It’s really great and with the man himself, Dave Friedman (This is a Something Weird production), John Waters and even Joe Bob Briggs in there too, well I don’t think that anyone with a penchant for the man’s work could be disappointed. It was much scarier outside the movie theatre because Rangers and Celtic were playing and Bigot Central was going full swing. I managed to pretty much body swerve all that apart from a smattering of them on the train home.

And last night... Southside Johnny and the Asbury Jukes. I hadn’t seen any version of the band since they opened for Graham Parker in (I believe) 1977. Hardly seems possible but in my recent tour of the past, it seemed like time to revisit this particular boardwalk. Particularly as they were playing a proper theatre, The HMV Picturehouse in Edinburgh not the Renfrew Ferry.

Strange that I end up scoring a ticket outside from the Rev. Ralph MacGillivray. Although we correspond through facebook, it had been many years since we’d met so that was a welcome coincidence. Being a bit knackered, I had pondered the option of sitting in the balcony but the upstairs wasn’t open. Haven’t experienced the sound up there and it was going to be a long set.

The opening band was awful. A terrible mix of overbearing confidence and the curse of competence. Not a good combo. They seemed very pleased with themselves and the audience largely encouraged them. This was the first time that I’ve been to a show in recent times that I definitely wasn’t the oldest person there. And besides, SJ doesn’t need an opening act and this was no warm up.

It’s a measure of a show’s calibre when 2 and a quarter hours goes by in a flash. I won’t say that there were a couple of moments where I didn’t flag, but that was more down to my tiredness. At the very high points, like “Talk To Me” and “I Don’t Want To Go Home”, it was like standing on the corner of exhilarating and heartbreaking. Those horns were not set on stun. The show was so far ahead of Springsteen’s recent performance in Glasgow that I can hardly quantify the difference.

I guess this is what you might call entertainment... things are in a bit of a fankle around here. No idea if or when normal service might be resumed.
Posted by Lindsay Hutton at 7:47 PM No comments:
Newer Posts Older Posts Home
Subscribe to: Posts (Atom)