A death in the Scotch Sitting Room. RIP - Ivor Cutler

There's reviews of sounds and video, Bruce Cole's photos of the '74 Stooges, hot pix, spam pomes, some stuff from the archives (Creme Soda & Buffalo Rock Writers Symposium) that used to be at the site, etc. And more on the way!

Also note that the first Gizmos CD (complete studio recordings from the original '76/'77 band) is back in print (third pressing!). Plus I've got the new Magik Markers CD from Gulcher, MX-80's latest from Family Vineyard, etc., etc. Buy stuff, so I can keep doing this forever! 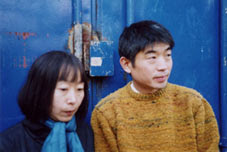 "Geographic is proud to announce a limited edition 7" single commemorating the imminent visit of incredible Maher Shalal Hash Baz. How's Your Bassoon, Turquoirs? was cut in Belle & Sebastian's rehearsal space and is Maher in rough-hued folk-pop mode with Tori Kudo imagining a new sound in part influenced by something his friend, Keiji Haino told him about the Only Ones. Already this track is legendary amongst Maher fans, so if you want one you better get on it quick. The single will be available at concerts, and from the Domino website, Monorail Music, and a few other strategic suppliers in April. The b-side is also amazing, a new Bill Wells composition called Banned Announcement, performed with Maher Shalal Hash Baz in Kyoto, Japan.

Maher's visit this time is at the invitation of Bill Wells, and is a one-off opportunity for British audiences to see a stellar cast of Japanese musicians, including Tenniscoats, Kama Aina, and Kazumi Nikaidoh, not only playing their own, incredible musics but collaborating with each other, and with Bill. Charting landmark to landmark."

And proving that we are a cross-cultural smorgasbord or whatever... an eye witness report on the Cynical Girls + Wreckless show in NY by Annmarie Pinarski.

Eric opened with a solo set from his impressive and ongoing songbook and punctuated his stint by reading aloud from his extremely entertaining autobiography in hopes of, according to himself, adding a little class to the evening. Thankfully, that didn't happen.

The crowd at Joe's seemed to breakdown as follows: 60-65% familiar with Amy and/or Marti; 35-40% on hand for the low booze prices of Happy Hour (the show started at the ungodly hour of 7 p.m. as it was the first of two for the eve.).

Of the portion of the crowd familiar w/ some aspect of the Cynical Girls about half apparently knew nothing before or beyond Amy's Joey Ramone song as they relentessly shouted for it between and during numbers. The Cynical Girls focused on tunes from Amy's first LP with a sprinkling of Jones' salt. Oh, and back to crowd percentages--about 95% drunk.

Part way into their solid set the Cynical Girls surprisingly offered a bit of skit humor with Jones and Rigby as painters in a quandary because they had no model. In walks Eric, clad in a bathrobe, to save the day. He strips down to a t-shirt and skivvies and launches into an epic nearing-10-minute version of 33s and 45s, by far the highlight of the evening, even though many in the crowd were distracted by Eric's "massive package" on clear display behind the flimsy cloth of his knickers.

For better or worse, the question most on hand will take away from the evening is, was it real or was it fresh produce artfully stuffed? The package, not the music. As always with this bunch, the music was as real as it gets."
Posted by Lindsay Hutton at 6:37 AM 1 comment:
Newer Posts Older Posts Home
Subscribe to: Posts (Atom)