Posted by Lindsay Hutton at 5:31 PM No comments:

This is the elusive Per Gessle song... it's a little "Primitive", right?

Thanks to Carolline...
Posted by Lindsay Hutton at 5:16 PM No comments: 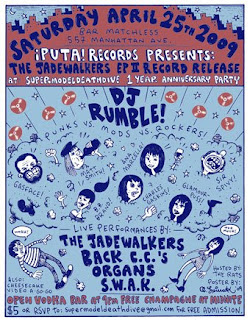 Posted by Lindsay Hutton at 3:26 PM No comments: 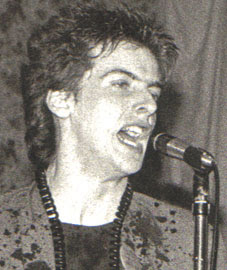 No idea who took the shot...

... anyway, the subject's new film is out in cinemas today!
Posted by Lindsay Hutton at 12:20 PM 3 comments:

It’s been quite the week for anniversaries of people shuffling off this mortal coil.

Wednesday it was 8 years without Joey (Ramone), Thursday it was Johnny Thunders (18 years!) and today, it’s exactly a year since the great Chris Gaffney went to the great roadhouse. 49 today since Eddie Cochran. It occurs to me that this is worth mentioning...
Posted by Lindsay Hutton at 11:47 AM No comments: 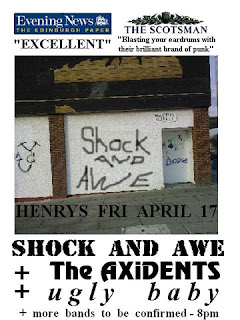 Some shows this weekend...

"the world famous shock and awe are playing at henrys tonight - at the moment its a bit uncertain whether we're playing with our stand in drummer Barry Ands or our stand in drum machine Debbie Suicide, or you if you fancy it ! either way its going to be different from the gig we played the other week Either way we are on at 9pm sharp, so plenty time for a pint and a chat after - henrys cellar bar, morrison street at the lothian road end, I'll probably be playing my silver sparkly guitar because I broke my other one while kicking it round the stage the other week also performing tonight in a ear pleasing punk rock new wave frenzy are THE AXIDENTS + PLASTIC ADULTS + CHATEAU GREYSKULL + UGLY BABY so 5 bands for 5 quid and a free cd from me if you want onesee ye there ? Cheers, Murray" 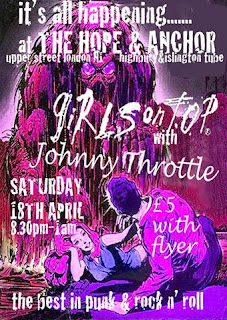 Girls on Top in London and a reminder that The Phobics are in action dahn there also...

Tom, you want to take it from here?

"Call yourself my mates? - Further to my earlier begging missive, I STILL have tickets for our gig at the Dirty South in Lee High Road this coming Saturday 18th April and they are slower moving than the veg in a kebab. Come on guys and gals, 4 bands plus us for six quid - a recap - You will be entertained by: CATFIGHT / WONK UNIT / THE PHOBICS and THE BERMONDSEY JOYRIDERS featuring Garry Lammin from Cock Sparrer and Keith Boyce from The Heavy Metal Kids and - playing a rare London gig - PETER AND THE TEST TUBE BABIES. (Haud me back! - ha ha) Doors open at 7:30pm is and the bar is open til 2am so come early, stay late and spend Sunday saying hello to God on the big white telephone - you know it makes sense - It'll cost more on the door so act now save money and help the desperate old punk rockers - it's the gift that keeps on giving!! Thank you for your kind indulgence. TIGHTWADS!"

If you need to get in touch with Tom to take up his kind offer then do so via The Phobics myspace.
Posted by Lindsay Hutton at 7:20 AM No comments:

Reverse the trend of driving the record stores into extinction. Stay the fuck away from your iPod or whatever on Saturday April 18th. Embrace the concept of leaving your billet and visit a record store. Here’s an example of what’s happening but if you go to the RSD website then you can zoom in on what’s happening near you.

I’ve already heard griping about it being an opportunity for record companies to cash in by releasing special items. Wake up you diddies! – there’s a full blown crisis going on. In these times, when the populace is more likely to vote for a crap singer or some drongo that puts their pants on their head during a so called reality TV show (because it's in the script) – instead of who runs the country then y’know, that concerns me a little.

Listen to what Joni said. “You never know what you’ve got ‘til it’s gone”. I think that was a prediction of what might happen if the record stores vamoose.

So in Glasgow for starters… 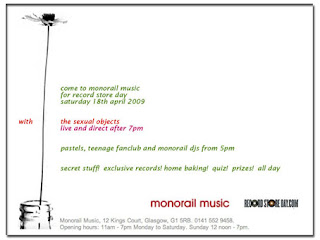 Sir Sandy McLean in The Herald today on the subject with details of wha’appen in Dundas Street.

Avalanche Glasgow schedule for the day (could be subject to chopping and changing over the course)... 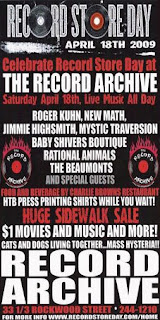 In Stockholm – A Rawk slant at Sound Pollution!

In Rochester, NY – New Math Now are doing an instore at Record Archive!

I bet that Plato in Utrecht are doing something and don’t forget the big bash that’s going down at the Record Fair there on behalf of NederGlam!!

If anything particularly tasty rolls in then I’ll post that later. If you want to blab anything special that’s going down on your watch, then send an e-holler. Operators are standing by...

With all the reportage of the vinyl single reaching a ripe old age recently and the fact that sales of these things are up, let's just keep these "special editions" out of the hands of the tossers that are out to fleece you on ebay. Let's flush those blighters out of the system. Re-live the days when you used to spend that well-earned pocket money on a shiny black thing that would provide hours of repeated pleasure.

Something you had to interact with that wasn't a mobile phone. It may take some convalescence but you can do it!

This just in from Mr McLean... (click on image to enlarge). 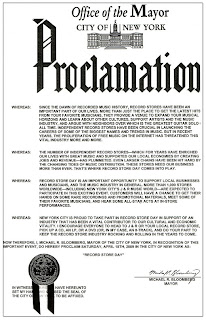