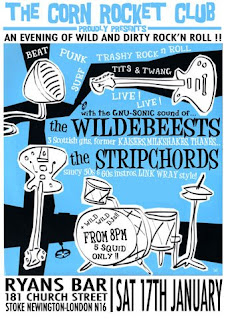 Posted by Lindsay Hutton at 7:01 PM 1 comment:
Being an information junkie, I sometimes wonder how other people react to the stuff that they’re ingesting all the time. For instance, the last couple of days have been awash with some shortlist of acts that are expected to rise to prominence during 2009. I’ve listened to each and every one and while I don’t outright detest any of it, I wonder exactly what qualifies any of it to be hoisted above the parapet. And what can really become super-popular anymore anyway? There are no sure-fire means to set any kind of heather on fire except to build an audience person by person. And even then, it’s a hellishly slow burn. I’m beginning to face the sad fact that music just isn’t that important to people anymore.

If they care at all then it’s because it’s tacked on to some game or other. I’m not talking about us here but this is pretty small potatoes. I always check out what people whose taste I respect flag up. Lots of people used to but now doesn’t translate into any kind of buzz at all. I don’t think that the socio-political terrain is changing like it should either. I don’t think people are angry, I don’t think they’re mad as hell and I think they’re pretty much just resigned to taking it.

I’ve never known the malaise to be quite this desperate. There’s more excitement about the prospect of getting a pint for 99p than there is about anything. Getting blasted, that’s the way to go. The constant bombardment is getting me down. I admit it. What would be the point in refuting that? However, I might be down but I’m not fucking out. Not yet. The bastards that caused all this are hoping that we will be though and I hope to hell that there’s some of second wind ready to blow through their cosseted world. For all of our sakes.

Never mind though, America gets a double whammy (I’ve heard that expression be used a lot on the radio this week) on January 20th. It’s the presidential inauguration AND the day of the Matt and Kim album release for “Grand". 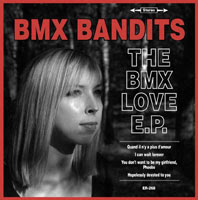 This new BMX Bandits Love EP will be available on 7" (and download) this coming Monday. The Duglas produced Nick Garrie single will also be out on the same day. I was going to reproduce the blurb from the Elefant Records site but I'd rather you visited it.
This Spanish label puts out great stuff in excellent packaging with all the heart and soul that's been buried in this so-called reality fixated world. Real music made by real people. You think it might catch on?
Posted by Lindsay Hutton at 9:16 AM No comments:
Newer Posts Older Posts Home
Subscribe to: Posts (Atom)