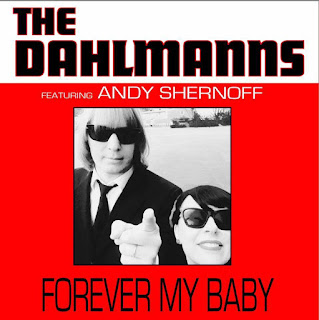 I never saw this coming.

While actively trying to get a print version of NBT together to mark the 40th Anniversary, it occurs that the label will be reactivated too nearly two decades after the last “release”. With good reason. Better than good actually. It’s the result of my favourite act from now teaming up with the guy that set me off on this road.

The Dahlmanns have recorded two brand new Andy Shernoff songs, “Forever My Baby” a duet between Line and Andy. It hits like a classic BŐC ballad crossed with a girl group anthem. Flipside, “The Last Time” could, in my opinion, just be the best thing that the Moss Rock City crew has committed to “tape” thus far.

There’s likely no actual "tape" involved but the way that Chris Frehley realises his own particular wall or sound makes him a power pop bliss Max Martin to my ears.

This could - of course - be construed as "conflict of interest" but I assure you that is humungously not so. All of the folks involved have given me something to believe in. There's a cool full-circle-ness that cements the notion of an amazing small world within a larger one that is seemingly bound for the big burny fire in the proverbial hand basket. I'm bordering on babbling here now so 'tis time to zip it. Excitement can get you like that sometimes.

Vinyl be due May/June time but as of today, hit up Pop Detective for the CDingle edition.
Posted by Lindsay Hutton at 6:10 AM 1 comment:
Newer Posts Older Posts Home
Subscribe to: Posts (Atom)